Unconditional Seasonal Support (KAO-SO1-NECDO- AF01-1128) is a 4month project funded by World Food Program (WFP) covering the vulnerable families affected by COVID-19, poverty, and the new economic crisis in result of the collapse of the government and takeover of Taliban. This project covers District 1,7,8, 9,16, and18 of Kabul province. The vulnerable families include widows, disables, orphans, the families living in tents, the families which were living in rented houses and most importantly the affected by COVID-19.

The project includes sub-activities for completing the milestones in each district the vulnerable families were identified by focal point/local representative (Wakil-e-Guzar) and Mullah Imams in each district. The identified families were surveyed by NECDO relief program team and vulnerable families were selected based on their physical and social status. They were given Tokens and were informed to be scoped on the given date and the scope team would be able to do the entries in database for the relief program.

The project was initiated from District 1 of Kabul province, each day approximately 500 families were surveyed and the selected numbers of families were given Tokens for the scope process. In total 3,200 households were surveyed out of which 3,000 families were given tokens and scoped. The final approved list of beneficiaries was prepared by WFP. Amount (3,450/AFN) cash assistance was given to each family for one month as per list through the contractor Roshan Company. 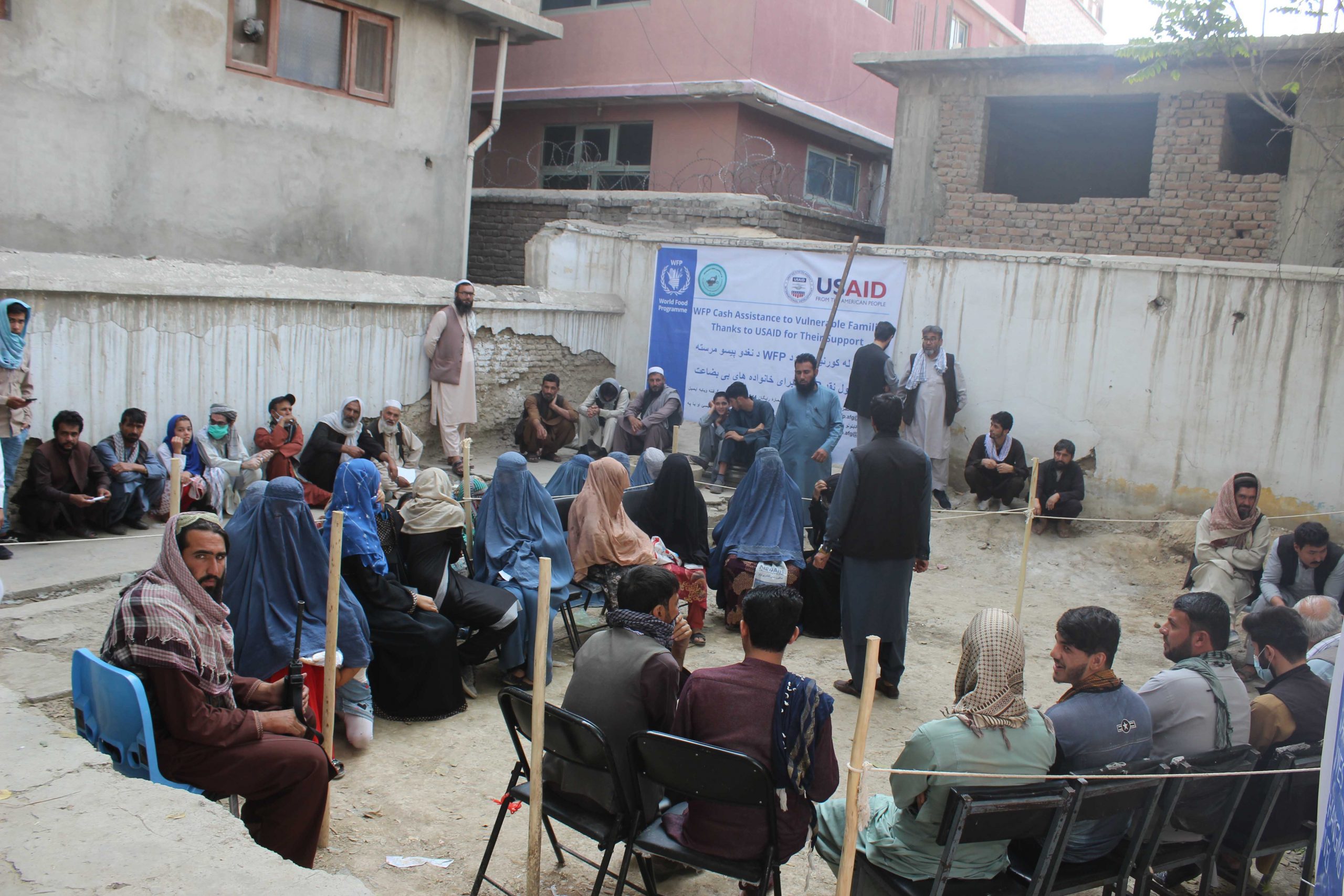 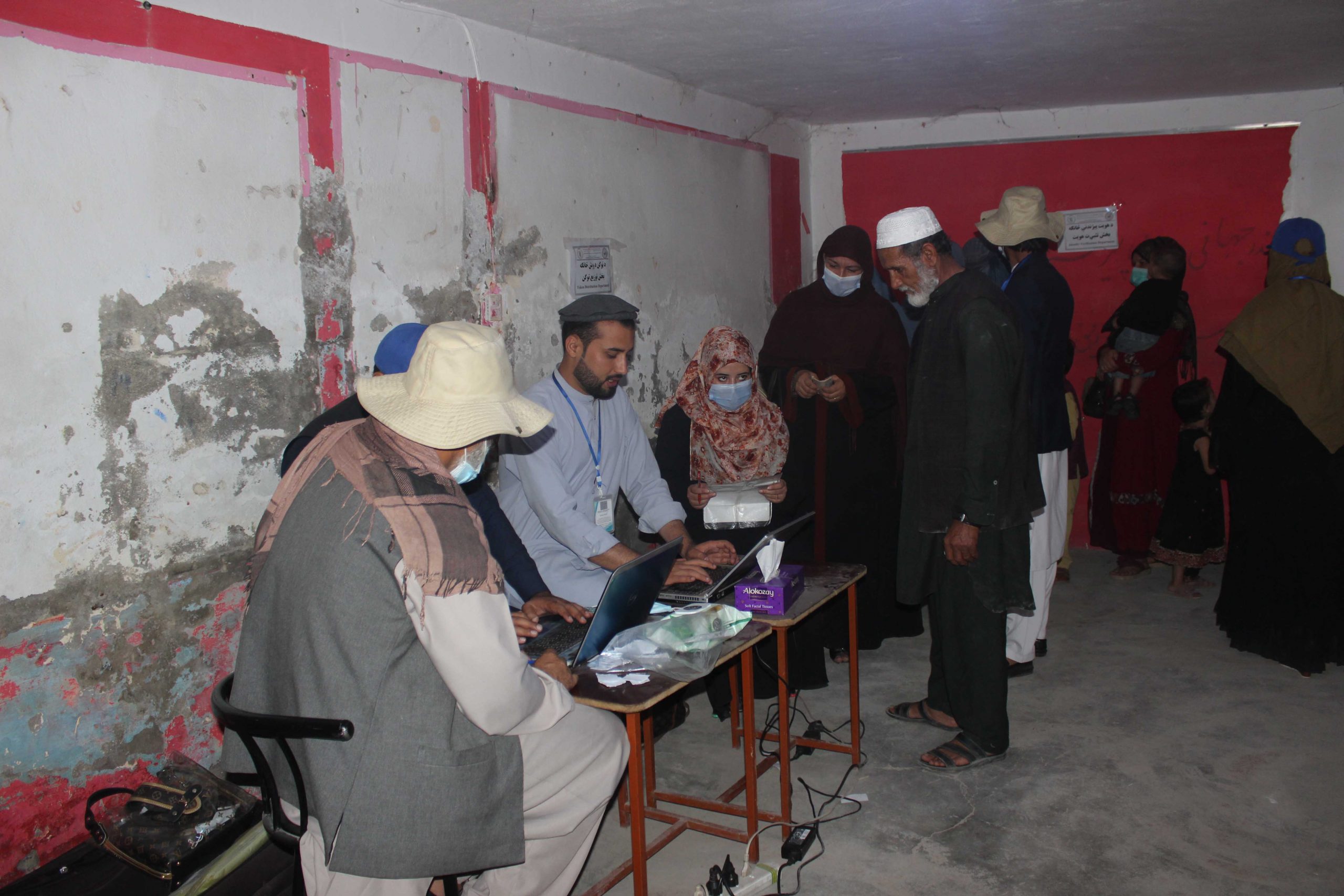 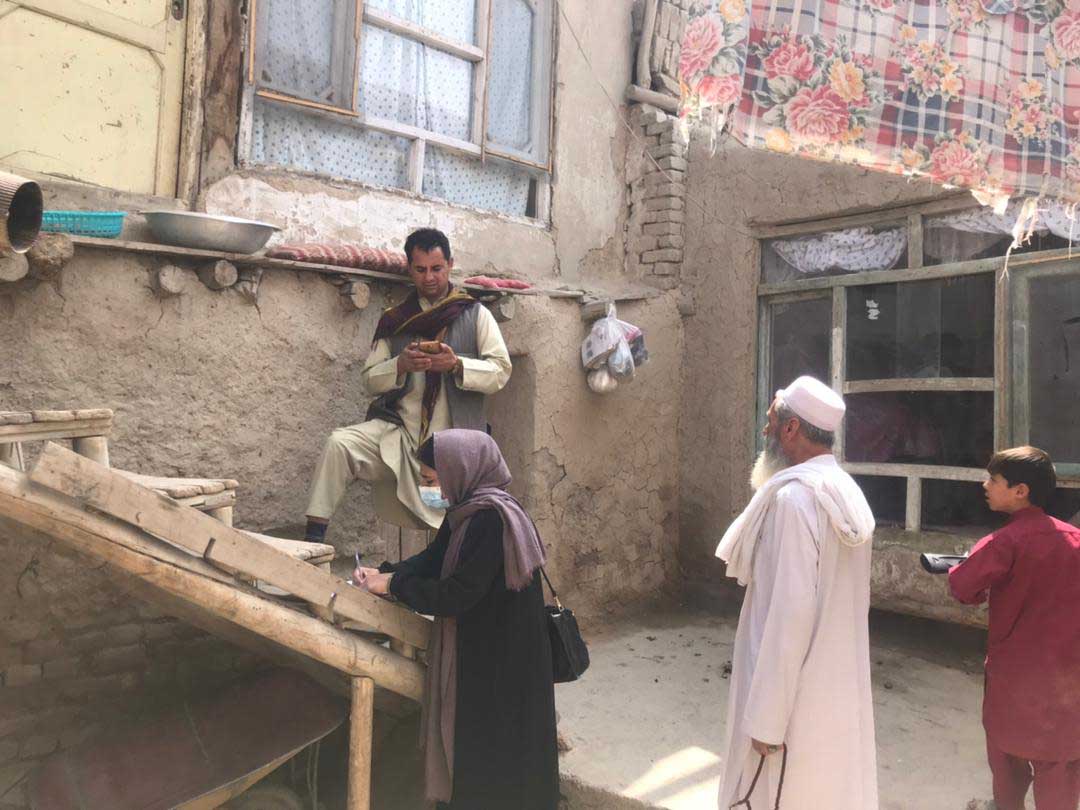 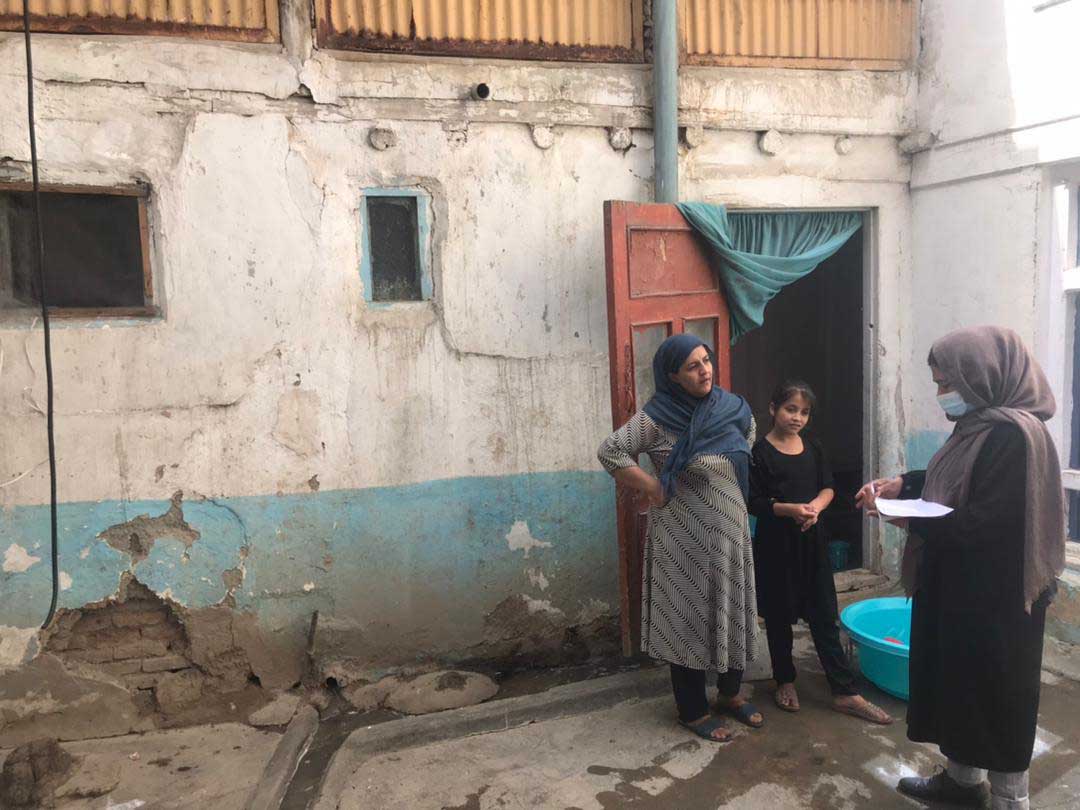 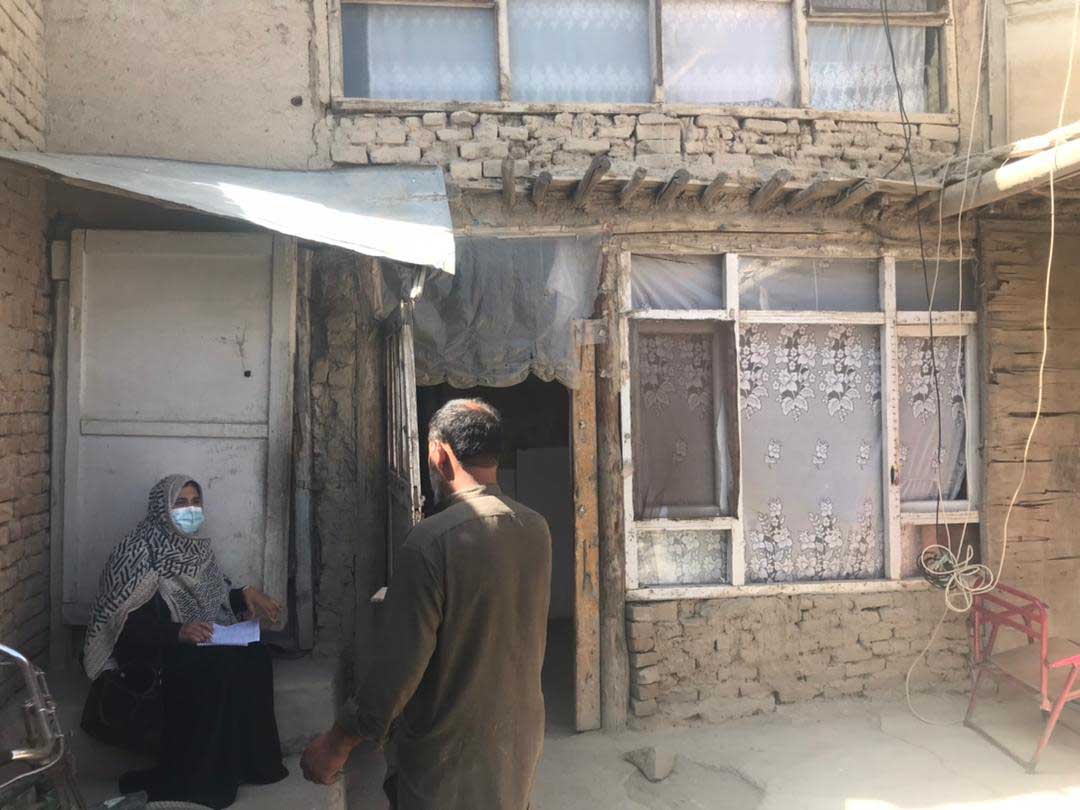 Initially NECDO recruited the survey and scope teams upon agreement with WFP representative from September 12, 2021 to September 15, 2021. The survey team asked the focal points, community leaders (Wakil-e-Guzars), and Mullah Imams to provide us the list of vulnerable families. As soon as lists were gathered, the team started the survey and each day approximately 450 families were surveyed during one day and the selected numbers of families were asked to come next day for scope (biometric) process. In total 3,200 households were surveyed out of which 3,000 families were given tokens and were scoped, but during the scope process WFP informed us that due to the lack of time, we must skip the scope process and start entry the survey lists to a simple database excel sheet. After the finalizations of the data entry, we had to send it for the rechecking and then WFP issued BPL and started start the cash distributions.

Most of the people who live in Kabul city are running their life with daily wages due to poverty and currently political, social, and economic changes has restricted them to go out for job or earn money. It is impossible to earn the money for family in these situations compare to pay for rent and other expenses. Women and widow is mostly affected people because the current new government increased the domestic violence and economic conditions. The proposed intervention is the well justified action to provide temporary support to the targeted number of households in these unexpected and un-estimated situations.

The Survey and Scope processes were completed on September 20th, 2021 and the list was sent to WFP for final approval. The approved list of beneficiaries was received from WFP along with Tokens. The tokens and lists were printed and the sight for distribution was arranged by project manager. Hence, the community leaders (Wakil-e-Guzars) and other representatives were contacted and asked to send the selected and approved beneficiaries to the assigned location and each household receives (3,450AFN) cash for one month.

The token number was allotted to each beneficiary and it was mentioned to them in order to receive the cash next day. Hence, upon arrival of the beneficiaries the NID (Tazkira) numbers of Households or Alternatives were checked in the database to confirm the deserving beneficiary. The token numbers were given to them to move forward so that NECDO team could be able to get the thumb print and guided them to receive the cash from Roshan Telecommunication Company representatives. At the end of each distribution day the tokens were counted among Roshan Telecommunication Company and NECDO representatives who were endorsed by WFP field monitor. Meanwhile, the beneficiaries were keeping on reminding to have a social distance and follow the instructions of Ministry of Public Health appropriately.

This project has been started from PD-1 and NECDO survey and scope team conducted survey successfully with scope (data entry in database) which was started in September 12, 2021 and completed in September 15, 2021. The purpose of this project is to assist the most vulnerable families affected by COVID-19, and political, social, and economic changes in Afghanistan with cash assistance. Each district has a specified portion of beneficiaries therefore 3,200 families were surveyed and 3,000 were selected for cash assistance program. Each beneficiary received the cash assistance of 3,450 AFN for one month and maybe WFP will assist them for two or three months more, through Roshan Telecommunication Company (cash provider). The cash distribution took place in presence of the field monitor from WFP and in the management of NECDO distribution site team leader. The cash distributions started from September 29, 2021 to October 09, 2021.

We are grateful to God Almighty and thankful to our team and NECDO leadership who worked round the clock to make this job be done successfully and we are glad at least these family can have the flour, oil and beans for their kids for a month time.

We are also thankful to WFP for the support and during the distribution OCHA media coverage is also highly appreciated.