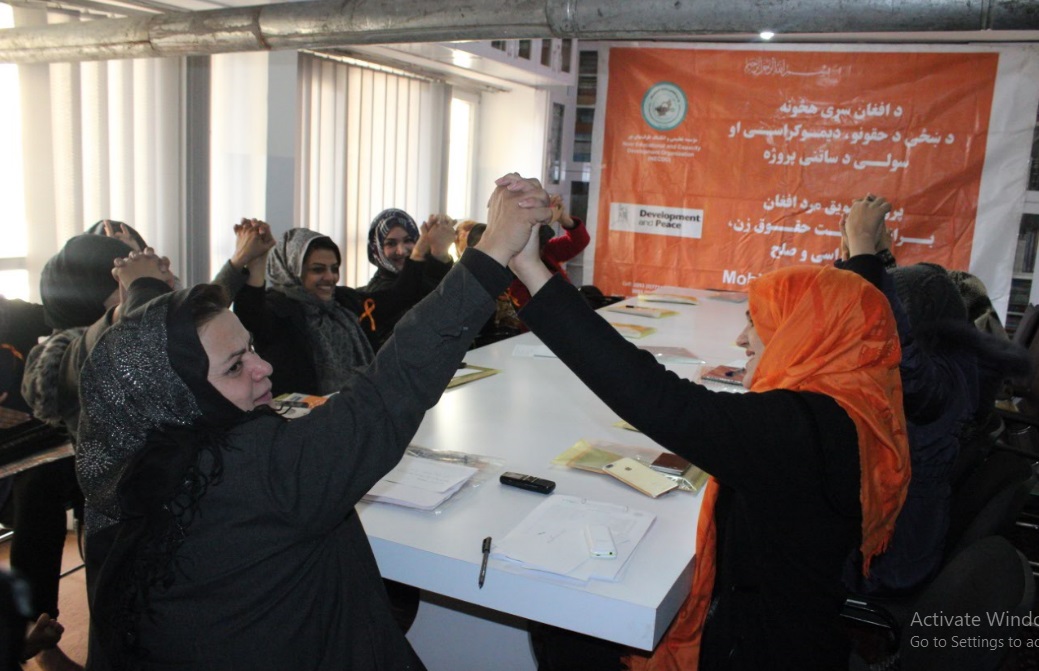 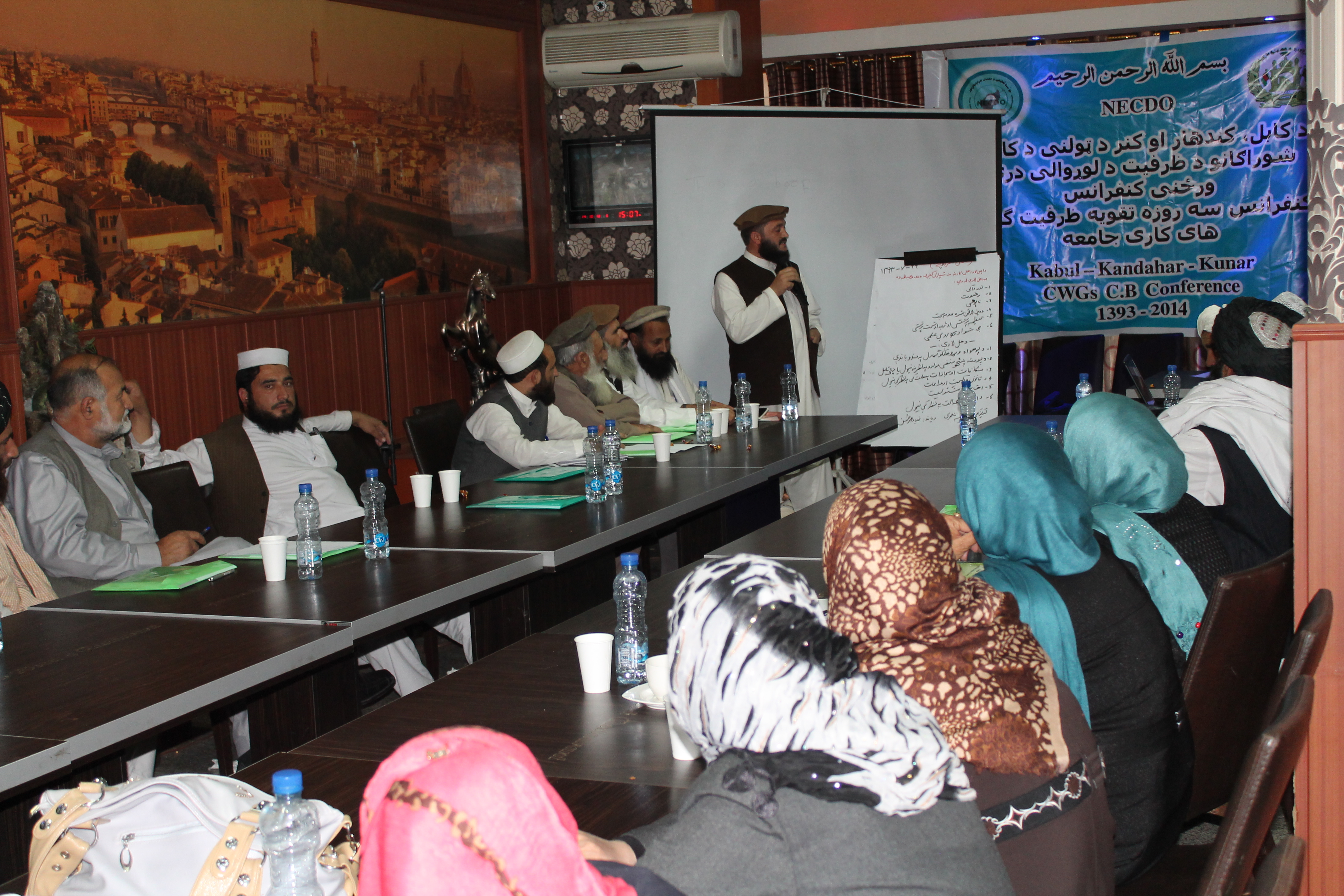 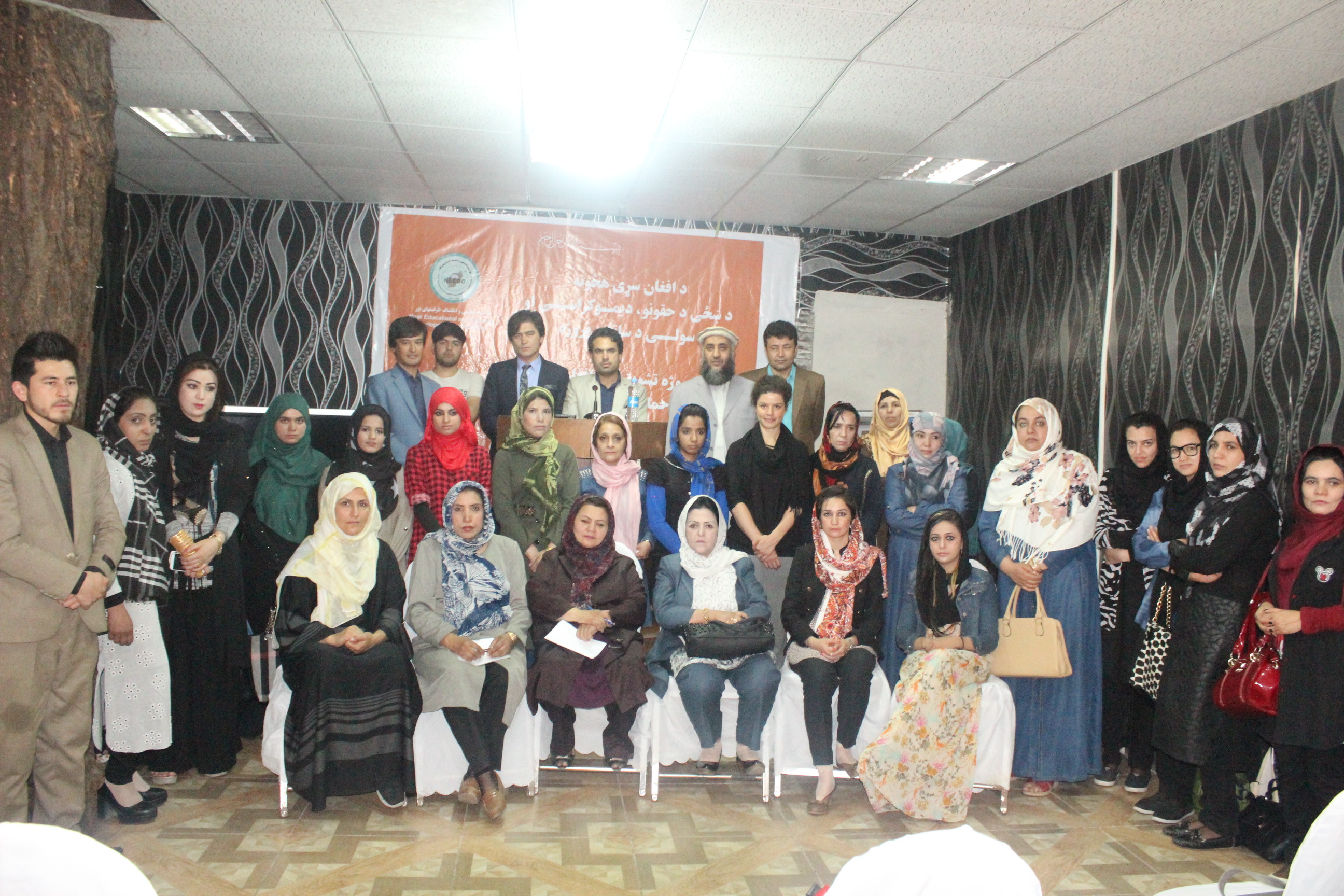 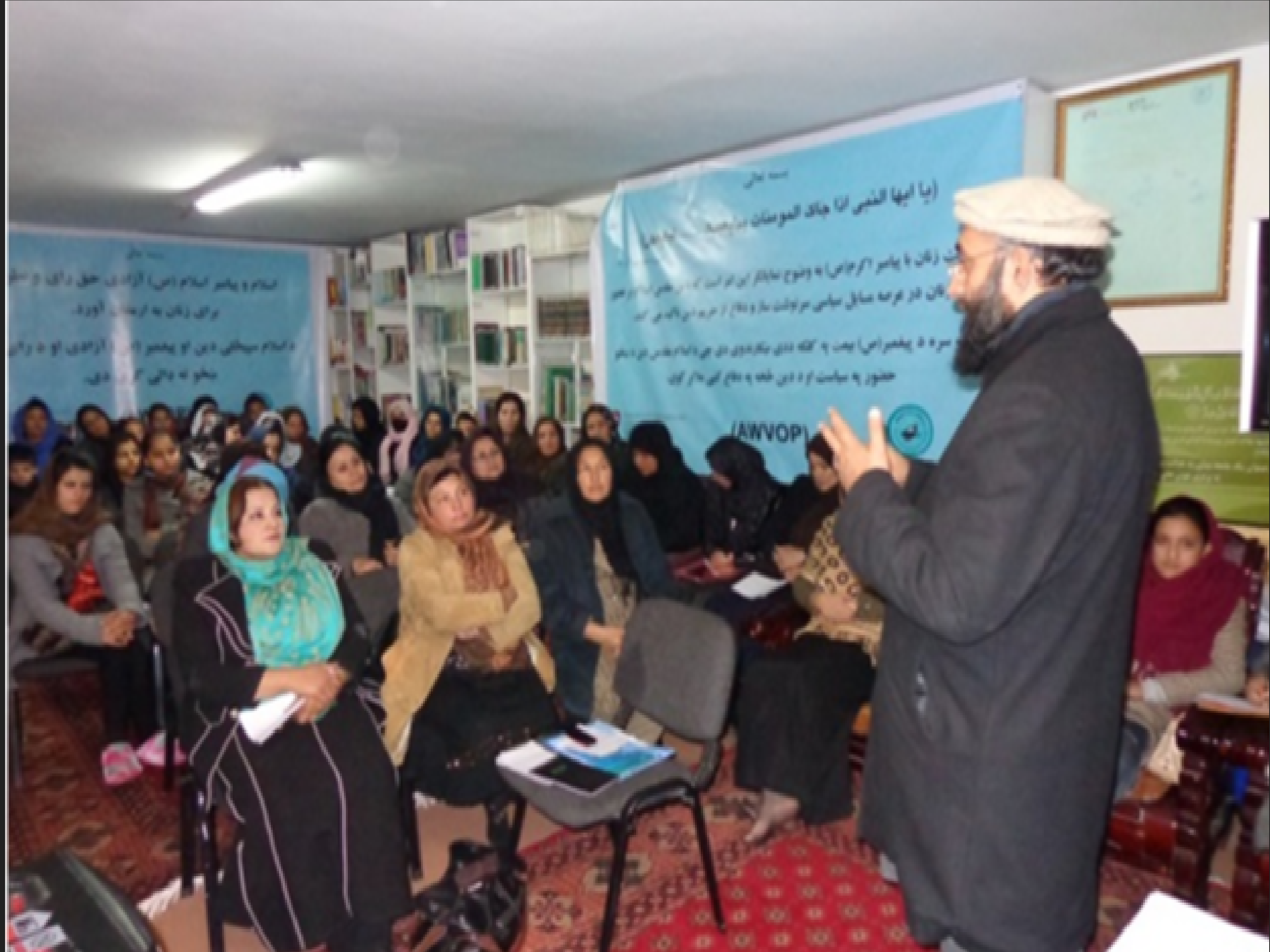 All human beings are in truth akin
All in creation share one origin
When fate allots a member pangs and pains
No ease for other members then remains
If, unperturbed, another’s grief canst scan
Thou are not worthy of the name of man

NECDO is an Afghan women local, non-governmental, impartial and non-political organization, registered with Ministry of Economy in 2002 with INO.95. NECDO was established in January 2001 by a group of volunteers to help and support needy Afghan women, youth, and children in the Refuge camps of Pakistan. When the Afghan nation was passing through time-tested moments of it’s history. The Soviet hand over and destructive civil war of Mujahedeen resulted in material and spiritual losses for the nation. NECDO started its activities with small means, and a great purpose, which was based on humanitarian and development assistance. During our social activities in camps, we realized the need for Peace through education, capacity building and income generation. This was the priority set forth. In the past seventeen years of NECDO has contributed for women, youth and children through its multidimensional activities expended in to 22 provinces of Afghanistan. We firmly believe that it’s better to light a candle, instead of cursing the darkness. Because the one lighted candle will be in position to light a few more around and this way we will get rid of the darkness and conflicts. This commitment and dedication made us to be a well-known and active NGO not only locally but also internationally. The commitment and professionalism pioneer us to be a role model for coming generations and foster to pave the way for a better tomorrow for them.

To educate and to raise awareness for peace building from self-awareness then in the family, reaching out to the community

To mobilize people to take action, to move forward positively no matter how small the step could be “letting a candle instead of cursing the darkness”

To network among individuals, organizations and corporations who are engage in the area of peace building and elimination of violence and social injustice to work together to create a greater impact

To advocate for social justice in all of its forms violence is unacceptable we foster to promote non-violent culture in all walks of life.

To reduce human suffering from conflict, natural disasters, poverty human sufferings which needs to be addressed by research, multi-dimensional activities

Transparency, Impartiality, Unity and partnership with like- minded organization

Professionalism & transparency- The core part of developmental activities that lead to achieve selected goals is professionalism in transparent manner. We are committed to endeavor to the values that are essential to the development of human resources and economic growth of the county. We believe that it is steady process and we struggle to achieve the highest standards both in our office environment and in our projects in the field. We have kept records of management and finance through the period of ten years and we do have audit reports of expenses in excess of $20,000.

Human Rights & Gender as Cross Cutting Issue: each individual in a society has rights and obligations to strive for living life in comfort and peace with equal access to resources & opportunities of empowerment. NECDO has played a positive role in reduction of violence against women in the light of Islamic values & Afghan government ratified International conventions as well as national laws NECDO is committed to support Afghan women who are the severe victim of wars and social injustice.

Inclusiveness: NECDO is trying to have inclusiveness in all program and activities for the people having a disability. We include them in all levels in our program and activities up to 20%. We believe disability is never obstacle for social participation we need to pave the way for meaningful and full participation. NECDO takes active part in Disability working group meetings and takes part for joint ventures and coordination with like-minded NGOs

Members: The board members (G.B) are key stake holders who will supervise, monitor and guide the Executive Director for professional management NECDO program & project without any economic benefits. The duration of the position is for two years. This is a volunteer position and they have vote power on decisions

Management Team: Executive Director is working under direct supervision of the Board Members, and she updates them about activities through board meeting which holds at least 4 times in a year. She is responsible for overall management of program and projects. She supervises the management team based on their job description.

We priorities the following Points while conducting our activities:

NECDO Financial Procedure: NECDO is a project-based organization where project management and delivery comprises the bulk of program activities. NECDO administrative is embedded in the program. NECDO mostly has maintained its financial records in Excel spreadsheet from 2004- 2008. Since 2008 we have utilized a double-entry system and Quick Book System, which has been implemented from January 2009 and onwards. Financial records are kept in each project files. Since 2007 NECDO has performed audits by an independent auditor company. NECDO has also performed the audit of few projects when approval has been granted by the donor agencies. NECDO manages financial manners on a monthly basis, reports by finance department where they also have financial planning, or liquidity plans and after approval of it by Program coordinator director approves it. The check has been issued and bank for the finance department unless and until the clearance has not been done there will be no other money issued. NECDO financial year is starting from January- December and annual planner for expecting financial resources. NECDO also maintains store record and we have purchasing committees for any procurement, as well.

NECDO has got national and International membership with: 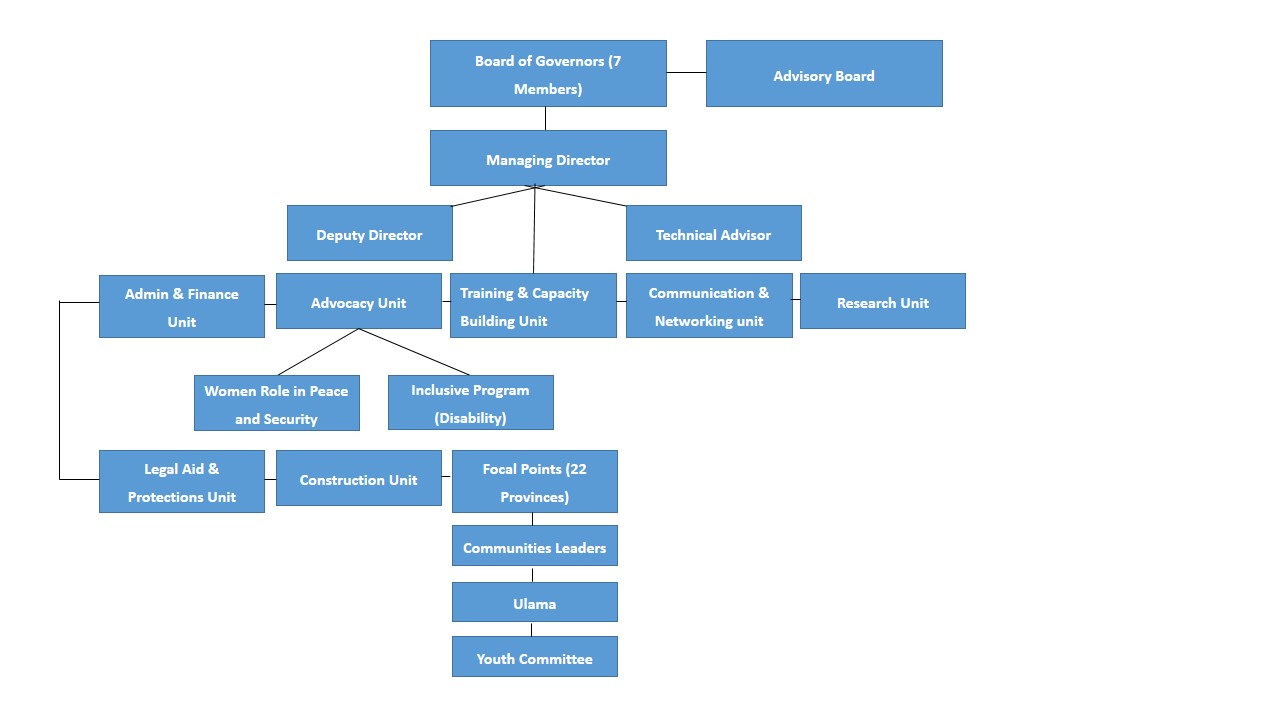