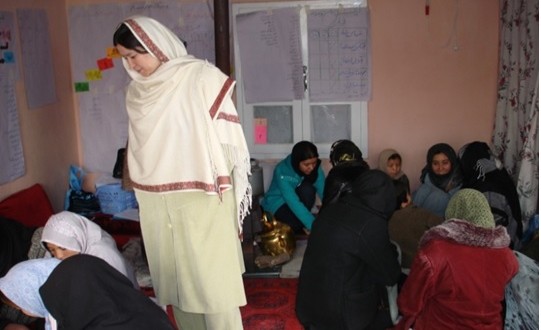 Details of the project:

Background of the Project:

War severe victims are women all over the countries of the world. Particularly in Afghanistan during long term wars women have lost a large number of male members of their families who are now responsible for winning the bread of their children. Therefore, over all women are suffering a lot especially in the areas where civil war was lunched and left behind a big sum of miseries. The Western part of Kabul city is one of the most affected areas.

NEC started its activities in the early 2002 with literacy program in the area for 450 women who are very needy through financial support of “Relief International” during the course of activities we found these women are facing great economic and social problems, which are contributing in conflicts, and fast growing of dangerous Psycho Social problems. We were getting every day different stories but the most shocking was the story of one of our literacy class in the location of “Ministry of Water and Power”. It was so that one of the students killed the other one just on hanging clothes in the same rope. The killer escaped and the story was told by eyewitnesses just like it was a normal every day issue, as if there was nothing wrong. Even some people were there and they did not stop the killer.

The reason behind all these fighting and killing is due to psychosocial problems where people lost every thing during the war and now they have to start a life without any facilities and opportunities, which lead them towards conflicts and violence. The other major issues behind these conflicts are too many ethnical, linguistic and economic problems which cause increase in the psychosocial problems. We also noticed that this invisible disease is widespread and very dangerous for having a sustainable peace in Afghanistan. Women are severe victim of domestic violence and it has very bad effect on brining up a better generation. NEC extended its work not only in Kabul but also in Ghazni & Jalalabad and right now we cover more than 2000 women only in Kabul under different projects. The current target group after getting different trainings and awareness programs has better life but for sustainability of the better life they demand self support programs of income generation. These women already selling some food items like (Bolani, Pakora, Shurnakhud….) but they do not have market for their products and as the quality of their work needs to be approved)

Project over all summary:

NEC arranged the “Small Business Training Program for Afghan Women” for the first time in Kabul province by technical support of Kweyan, Financial support of CNFA, for the period of two months (January- February 2007). The project started by conducting 8 day TOT training for 30 men and women from 5 different groups (Hasanyar group, Mussoda group, Fozia Group, Khadija Group) where NEC also introduced 6 master trainers from NEC staff member. After completion of the training for the trainers we developed work plan for conducting the same trainings for 360 women but through adult training methods as these women are illiterate in the third, sixth, and thirteen districts of Kabul province. The 150 women were trained from above mentioned groups and the rest 216 women were trained who are already beneficiaries of NEC under other ongoing projects. All the participants of the project are already doing some small agriculture business but don’t know the work methods and cannot get market for their products.

These trainings which we have conducted were very successful in two terms, one it established linkages between different groups working in the same directions and secondly it helped very vulnerable community members to get idea of possibility of growing their own business and self reliance on their efforts.

Goal of the project: to enhance women empowerment for promotion of small business skills for improving families’ economic problems.

Objectives of the project:

Details of the Project Activities:

The seven day (7th January- 14th January 2007) TOT training for master trainers of NEC and four other groups ( Hasanyar group, Fozia group, Khadija group and Mussda group) was conducted by Kaweyan in NEC main office, the training section such as trainers, teaching martial ,stationary, and plan for TOT program was designed by Kaweyan and venue, two times refreshments, lunch, administration & logistic plus equipments for the trainings and transportation were provided by NEC. The 27 –30 (1 male 7 & 23 Female) participants were in the training. Six persons participated from NEC (1 male and 5 female)

Specific topics were discussed during seven days of the TOT workshop:

At the end of the seven days workshop the participants received certificates from Kaweyan & CNFA. The workshop was very fruitful which brought together different actors in order to develop some joint activities in future.

Mostly every day the workshop started by recitation from the Holy Quran and after revision of the last day lesson the new day lessons were conducted according to the work plan. Usually, two – three facilitators from Kaweyan were leading the trainings.

Thus, NEC took strong steps to support other partners for helping vulnerable women groups, and CNFA also agreed on the changes in our working plan as to bring more cooperation among the groups.

NEC took responsibility to develop the work plan for the next coming workshops on the grass root levels and as there was Muharem ularahm (a religious day strictly observed by Shiet community) and almost they observe holy day for 7- 10 days, therefore, we plan the first phase during the first week of trainings into two shifts and after a week gape we conduct the rest of the workshops in one shift for four days

Details of the first phase workshops:

Target group of the trainings:

NEC is already working with more than 2000 women in different project in Kabul city and we identified these women by doing survey for our projects. During the course of activities we found that most of these women as bread winner of their families and they are cooking some food items and their children selling that on the corner of the roads. Usually these women are getting very few income or benefit out of it, we through, this training program wanted to show them the rights way of running a small business and improve quality of their products.

The other four groups had their own target group in the on going programs, these women were already doing some handy crafts, carpet weaving and other small business.

Topics of the trainings:

During second, third days the following topics were thought to the participants.

Every one has the ability of learning but the capacity are different we need different methods to fulfill the needs of trainings therefore our trainers with the past experience of working with illiterate women used usually adult training system for illiterate women, the methods were group work, snow balling, role-play, practical work. In the end of each training we had written evaluations from the participants.

The plus points our trainers had were:

The second phase was held from (February 3-6, 2007) in to three groups only in the morning shift for the period of four days. Each group was facilitating by two trainers from NEC and one observer from Kaweyan. The target group of this phase had small food business, carpet waving and husbandry. During the second phase we trained 82 women (55 women from NEC and 27 women from the Hasanyar groups). These women mostly had food business, baking.

The third phase of the workshops were held on (February 11 – 14, 2007) in to three groups where two trainers from NEC and one observer from Kawayan were conducting the trainings. It was also only in the morning shift and we could train 75 women from NEC group only. Summary of the trainings are mentioned in the following table. Most of these women were busy in jam & jelly making as well as carpet waving and it was only their family incomes.

The forth phase of the trainings were conducted on (February 18- 21,2007) where again we had two trainers in to three groups and each group had their following monitor from Kaweyan. During this phase we had only morning shift and we could train 67 women from NEC group. These women were busy in taking part in the family economics by producing some handy crafts, Turshi, Achar (sauces and gingers), Jam & jelly and blanket making.

A few findings from the evaluation of the trainee:

Especial stories we found during the workshops: