Preparations for the Graduation Ceremony:

Noor educational & capacity development ORGANIZATION (NECDO) commenced its preparations for organizing the Graduation Ceremony of the Trainees three weeks in advance. The following activities were considered:

The ceremony started by the recitation of some verses from holy Quran by Ms.Yalda Mukhtar one of the beneficiaries and the graduates. Afterward, Dr.Jahanbeen, the technical advisor of NECDO, welcomed the guests, introduced himself and then said, “This program started on first of July 2016 and ended 31st August 2017. At the beginning of this program an expert was hired to develop training materials. This person had prepared best materials for learners. Afterward the most qualified master trainers had been hired to train the learners. The master trainers had received an effective initial training (ToT) on how to train the students in accordance to the modern and participatory methodologies. After ending this process, the most eligible candidates from different institutions were identified through pre-established eligibility criteria, to get the nine months training.  At the beginning an entry exam was conducted by NECDO among 86 eligible women who had applied for this program. After the entry exam 43 women were selected to the program. The training program accordingly started as per an effective schedule (morning and afternoon shifts) was set in line with working schedules of the students. The main subjects covered in the training program were:

Besides, during the nine months training program, the students were provided with the opportunities to attend 4 important dialogues and many relevant workshops inside and outside the organization”.

Dr. Jahanbeen summarized the outputs, outcomes and impact of the nine months training program as per below:

After completing this program the beneficiaries most probably will cause positive/desired changes in their working environments, families and communities.

Beside this Dr. Faramarz Jahanbeen shared the following recommendations of NECDO with the audiences:

Subsequently, Mr. Ahmad Zia Anwari, the Human Resources General Director of the ministry of culture and information had a brief speech on Women’s Leadership. He said,

“ The leadership plays an important role in a society and is evaluated in the light of the progress of the talent and worth of that society. It shows that how a country has developed and has progressed. Societies need talented and qualified leaders because only leaders can lead a society to prosperity and success, and can achieve its goals. A successful leader can make successful society and organization. If a society doesn’t have a good leader on that time the society will be back warded and the people wouldn’t be able to achieve their goals. A leader has the key role in a society as Gandhi was one of the best leaders for his community and did lots of good things for his country’s development. A good leader should use his strength for the dignity of his community and added that God has given more and more strength to us, which must use these strengths’.

Afterward, Mr. Tariq Istanikzai, Director of the Ministry of Higher Education, presented his speech on the topic of the importance of implementing the educational projects, he said,

“Women make half of our society. Implementing such trainings is very important for women awareness in the society. In a society where women are educated and have the knowledge about their rights, such societies are progressed and developed societies. When woman is educated for sure her children would be educated also because she is the one who raise the children.  Educated mothers will dictate educated, talented and well-mannered children for society.  Women of our country need more like you youth leaders to work for their better future. This country can be developed by educated and active youths like you. And women leaders have more talent and capacity. All women should work and know about their rights”.

At the end, Ms.Patoni Haydari one of the graduates of this program shared her opinions about this program as such: “I and my classmates are very glad that we were part of this training and we learned a lot of things from this program on women’s rights from Islam perspective, and would suggest such opportunity to be provided to other women and sisters of mine who are awaiting such an opportunity”.

The ceremony ended officially at 4:00pm and the graduation certificates were distributed to all trainees.

A Brief View on the Project:

NECDO successfully implemented the Delegitimizing Oppressive Discourse Training for Afghan Women Women’s Rights Activist on Women’s Rights in Islamic Legal Framework; the project commenced soon after the contract was signed on July 2016 and ended in August 2017. The project was implemented in Kabul province. The beneficiaries of this project were Women activists and youth graduates of Sharia and Law faculty.

Overall Goal of the project: To Empower Women Rights Activists by providing them advanced Islamic education on national and international conventions and women’s right in Afghanistan as well as modern studies on women.

Overall Expected Results of the Project: 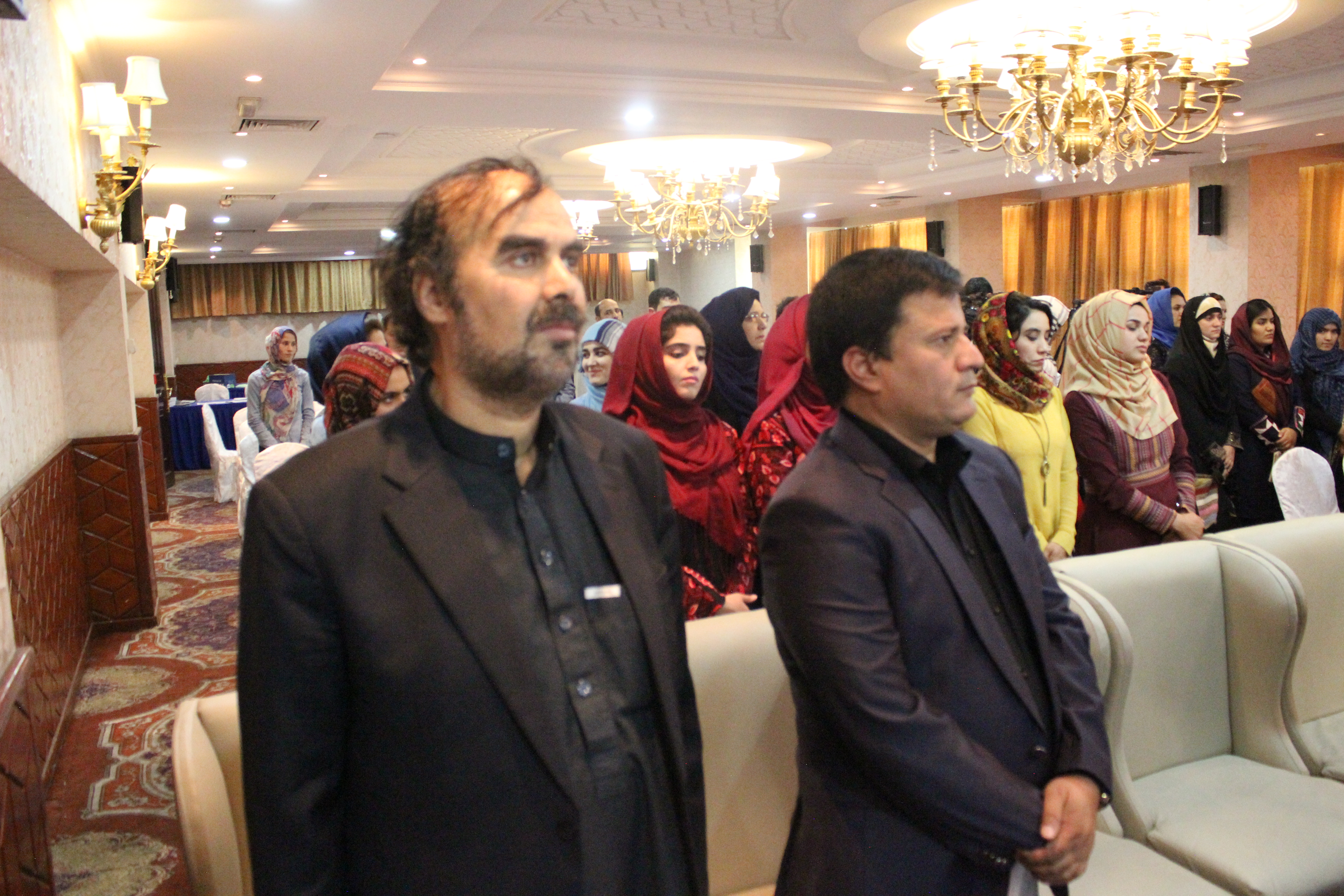 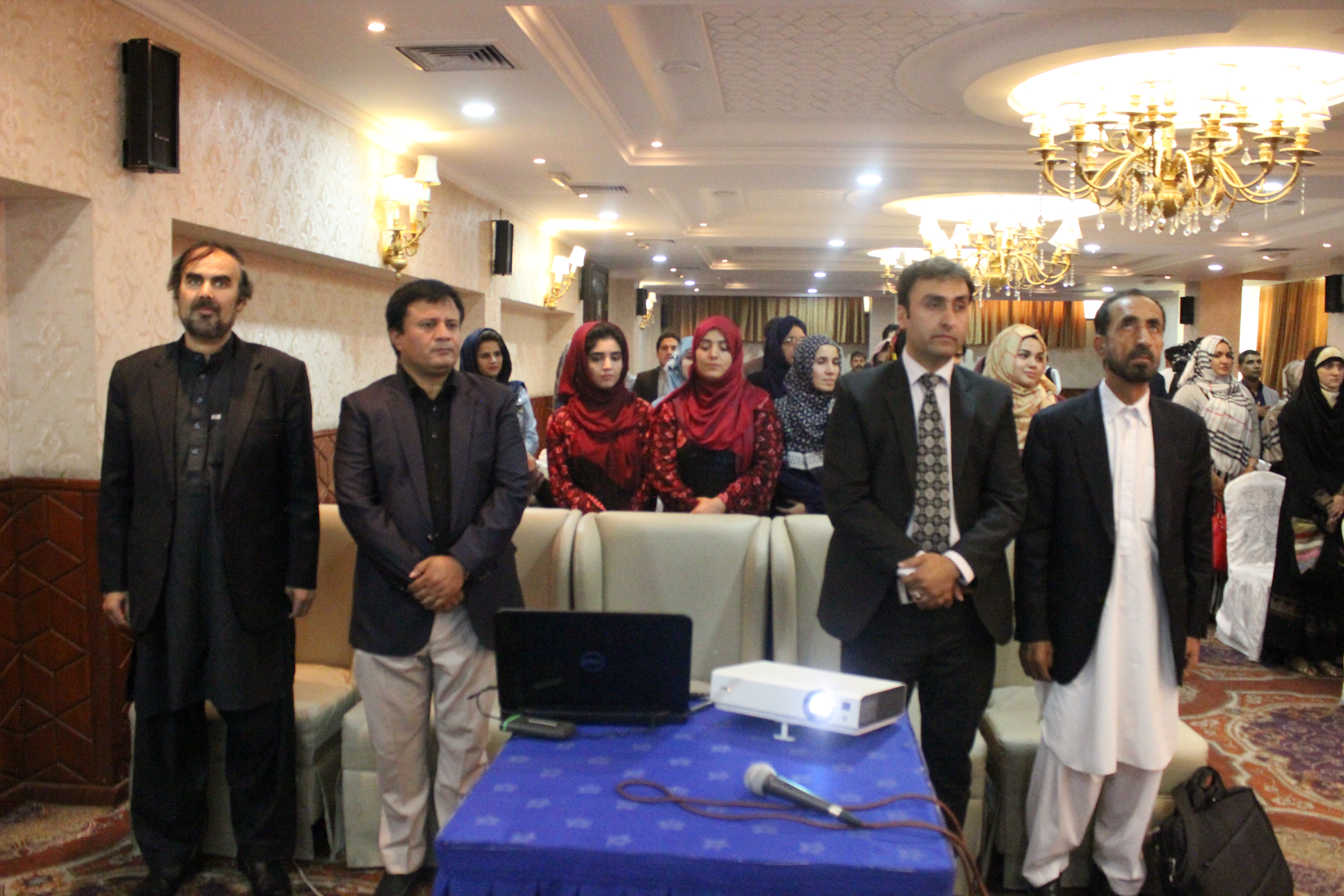 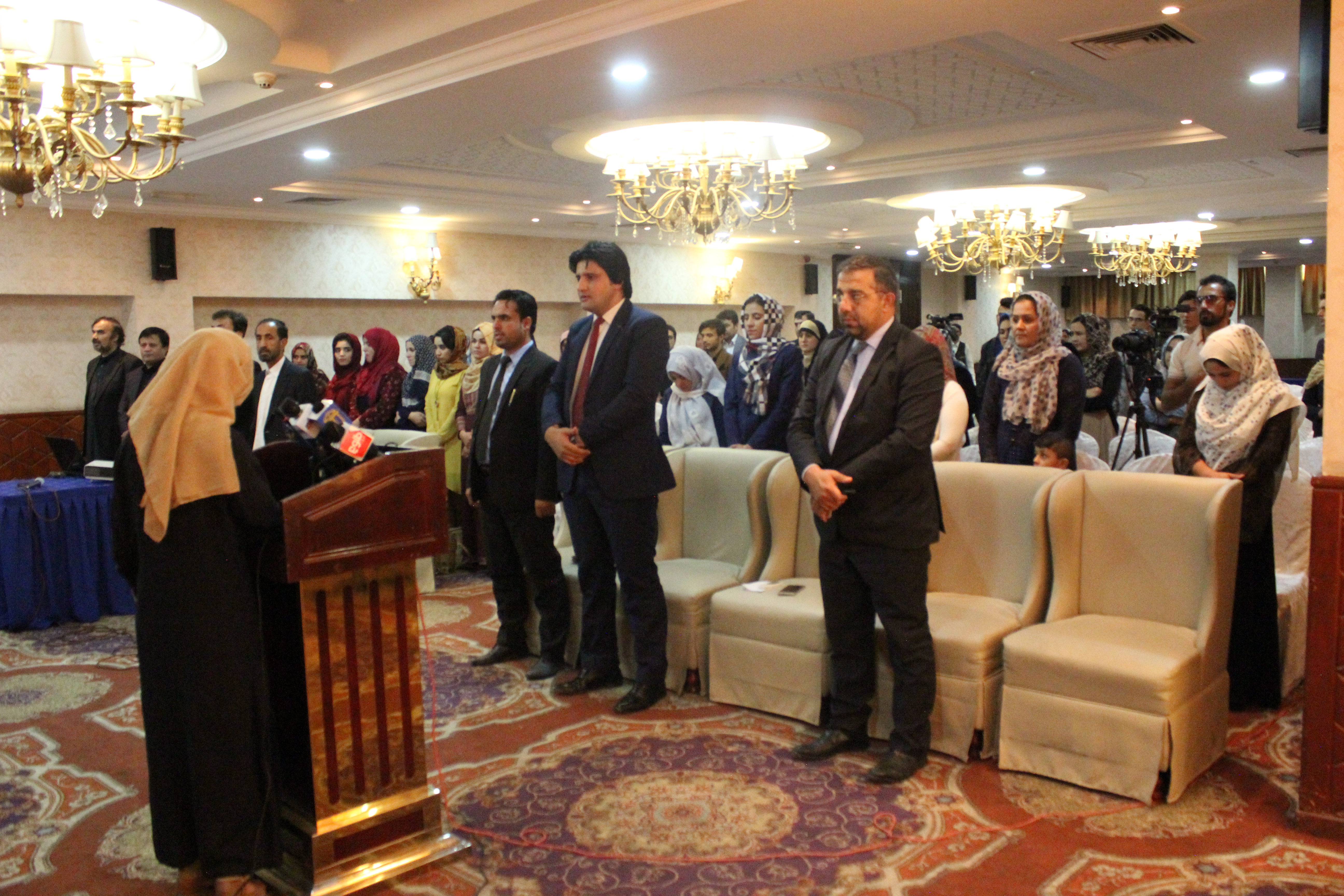 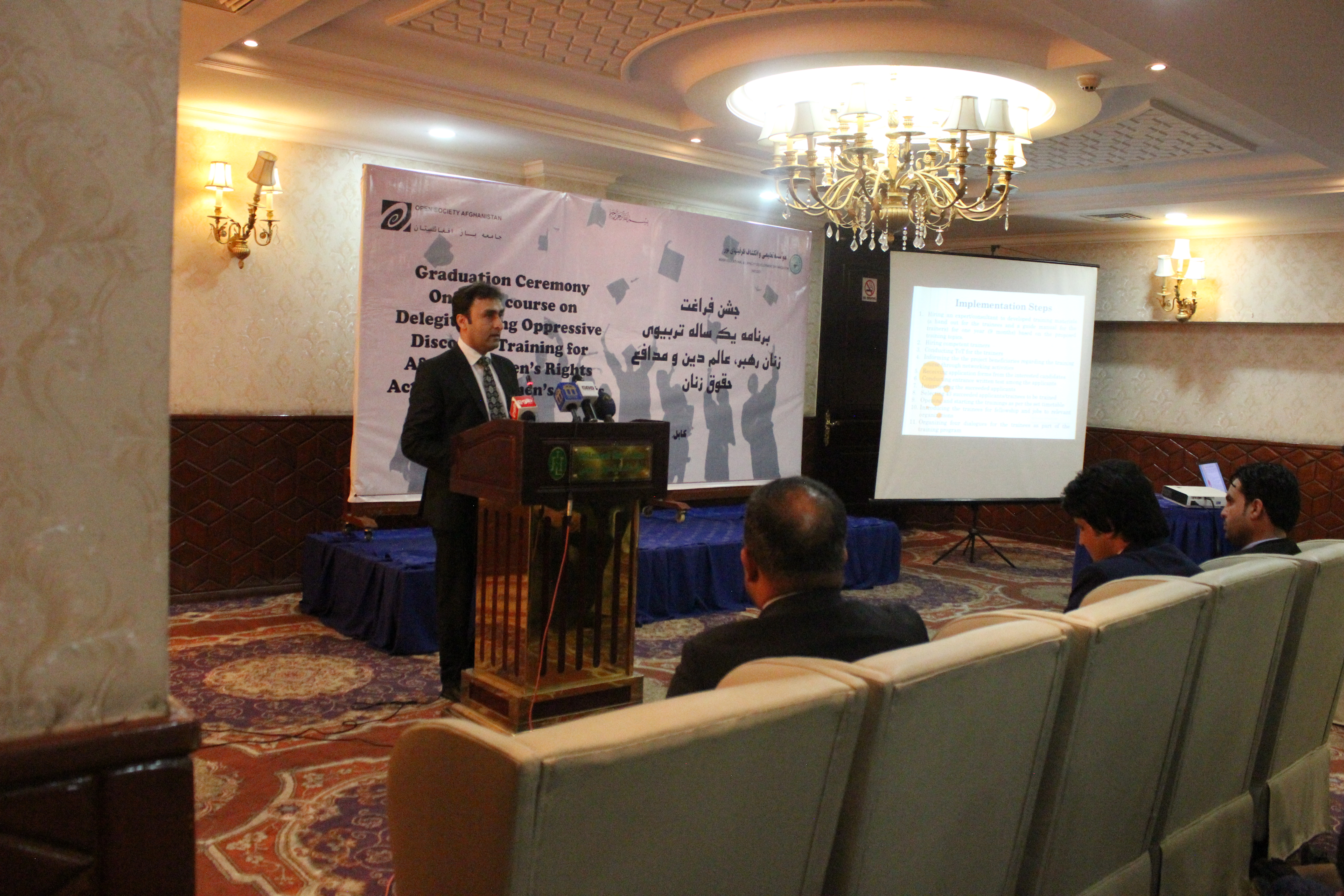 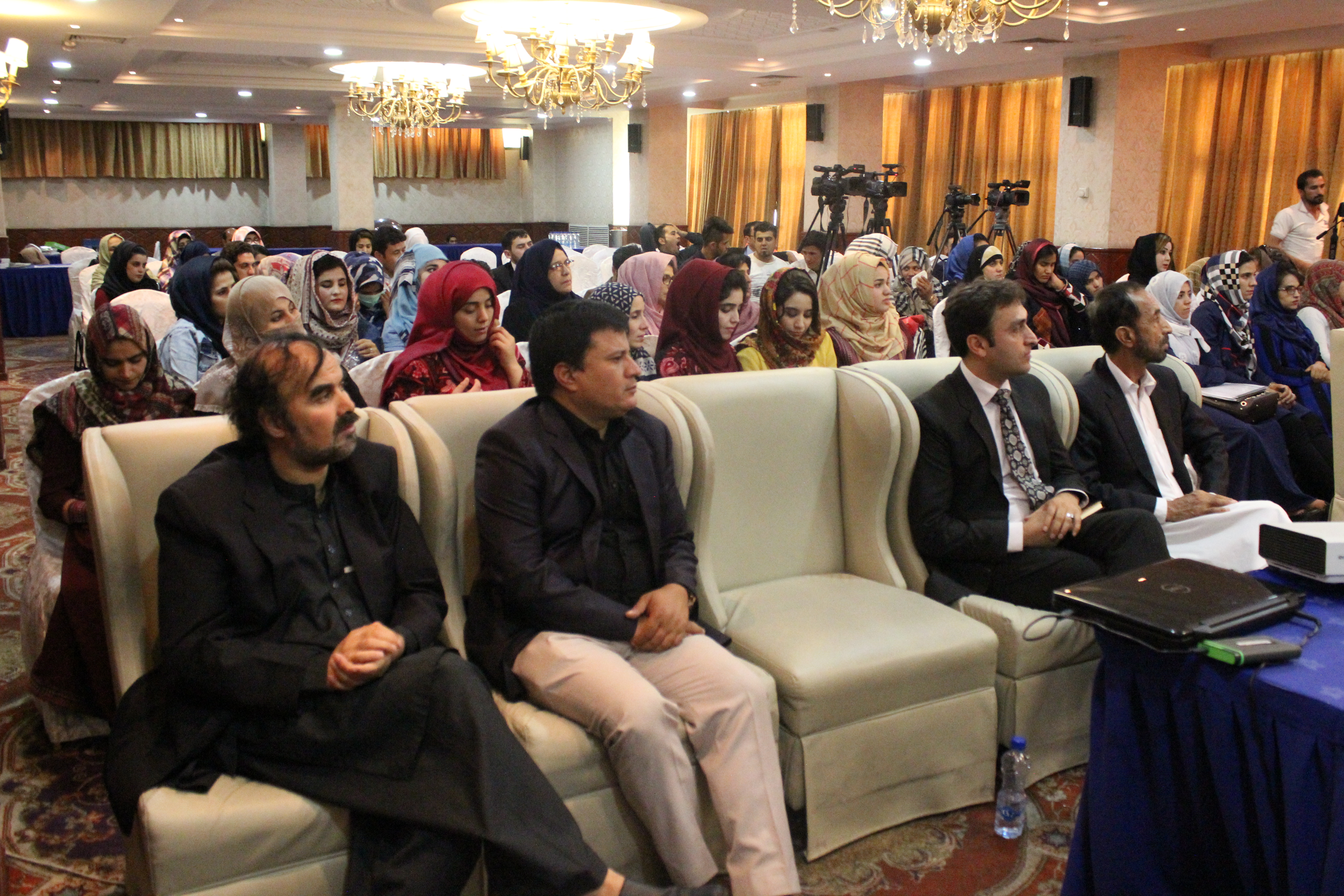 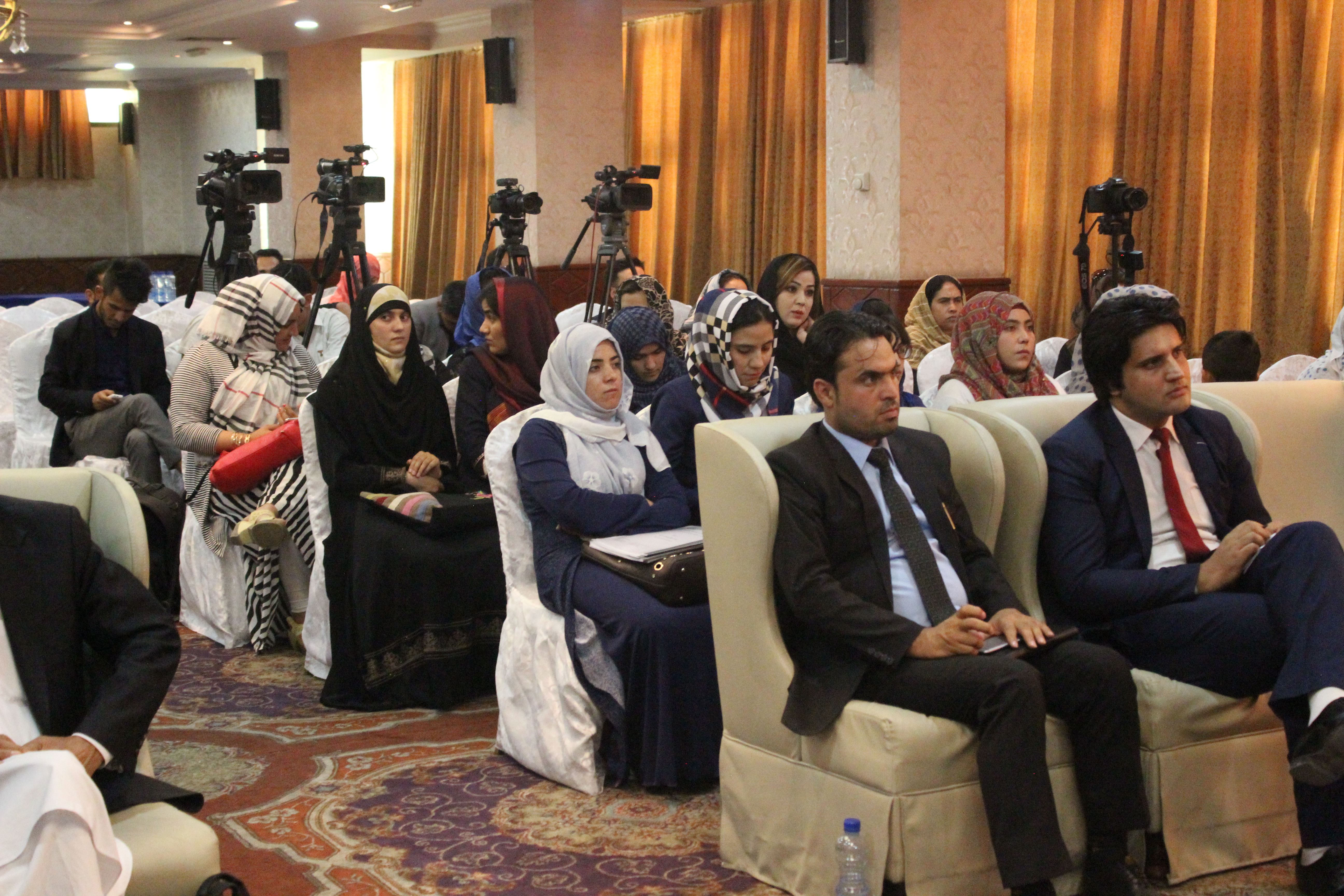 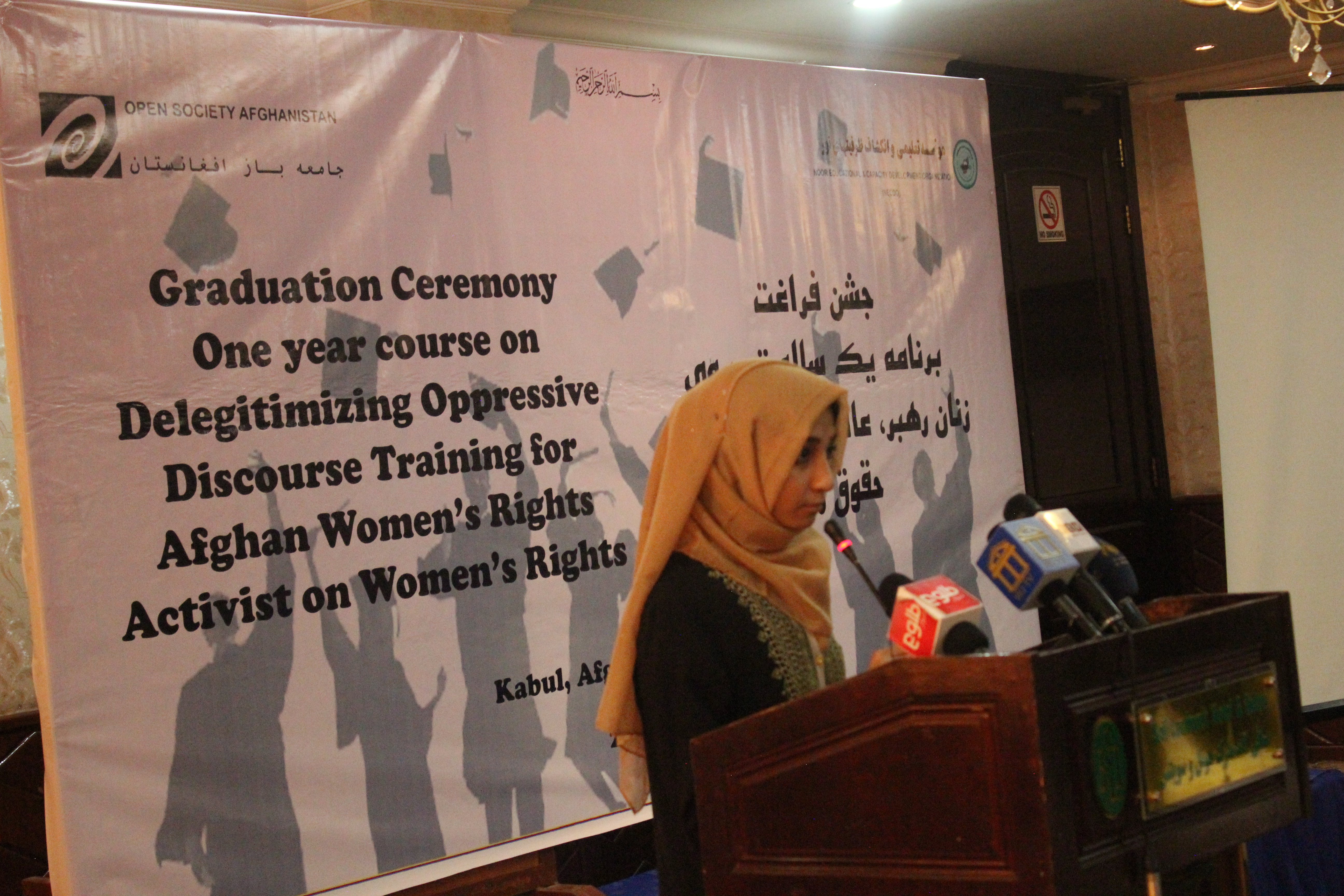 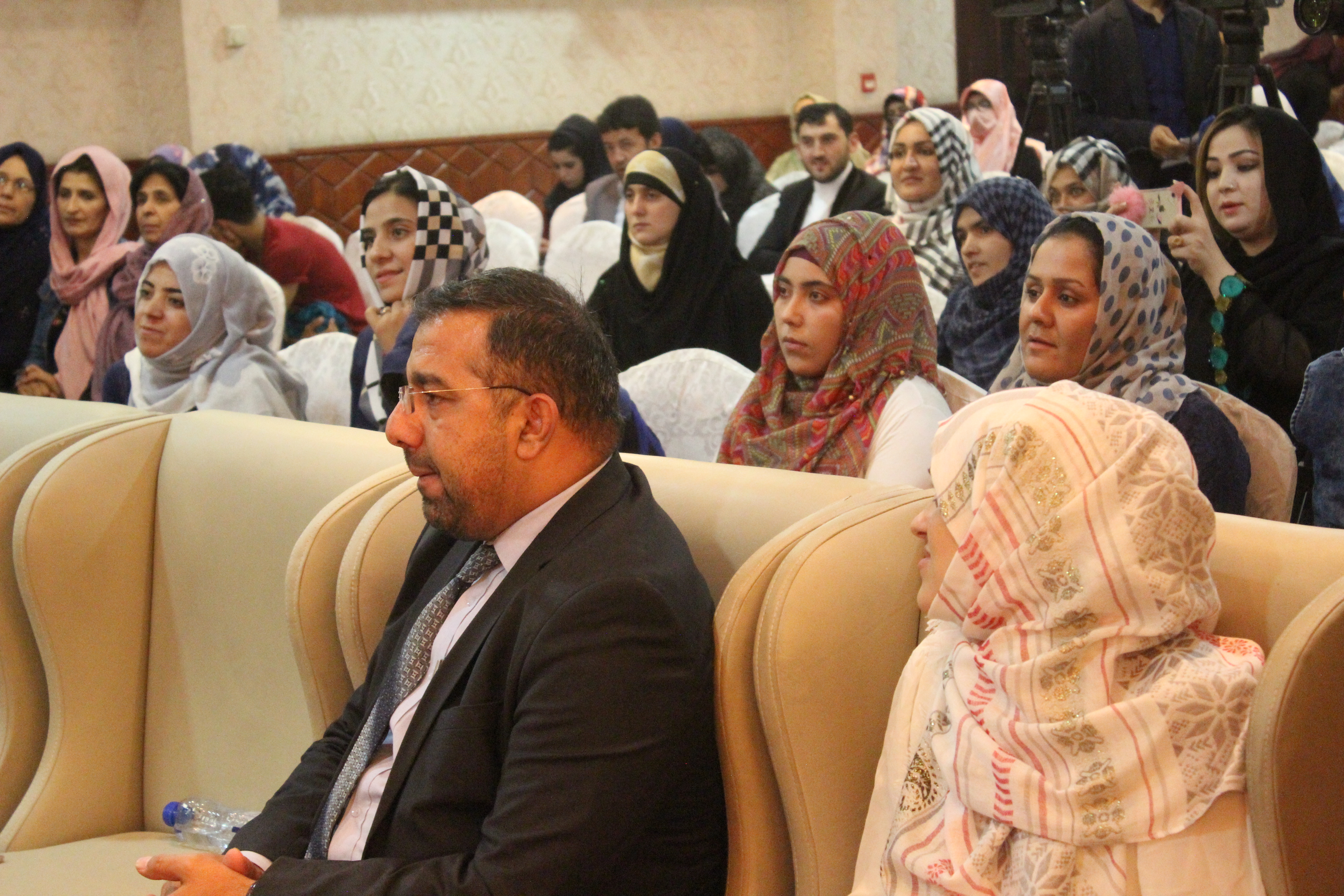 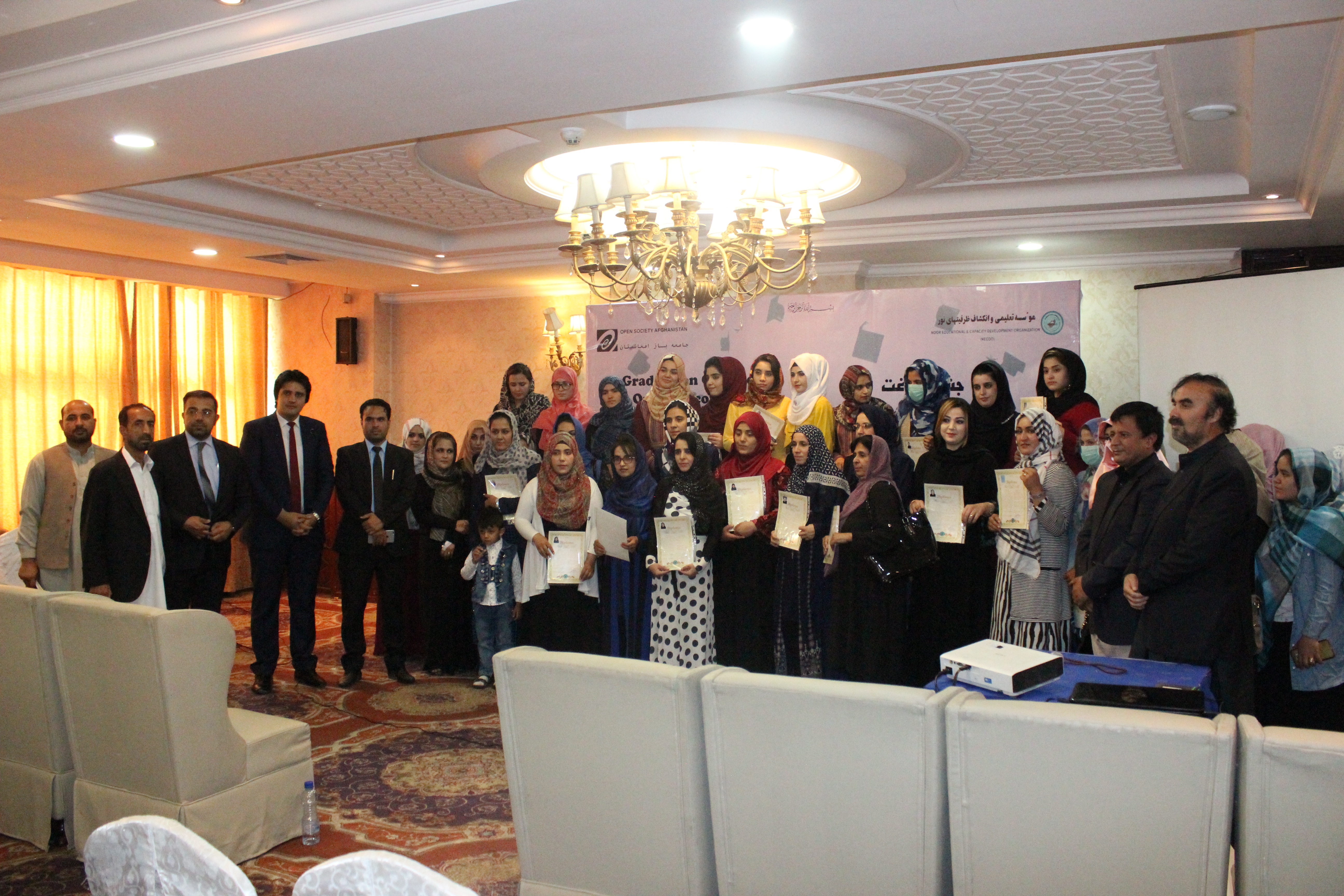 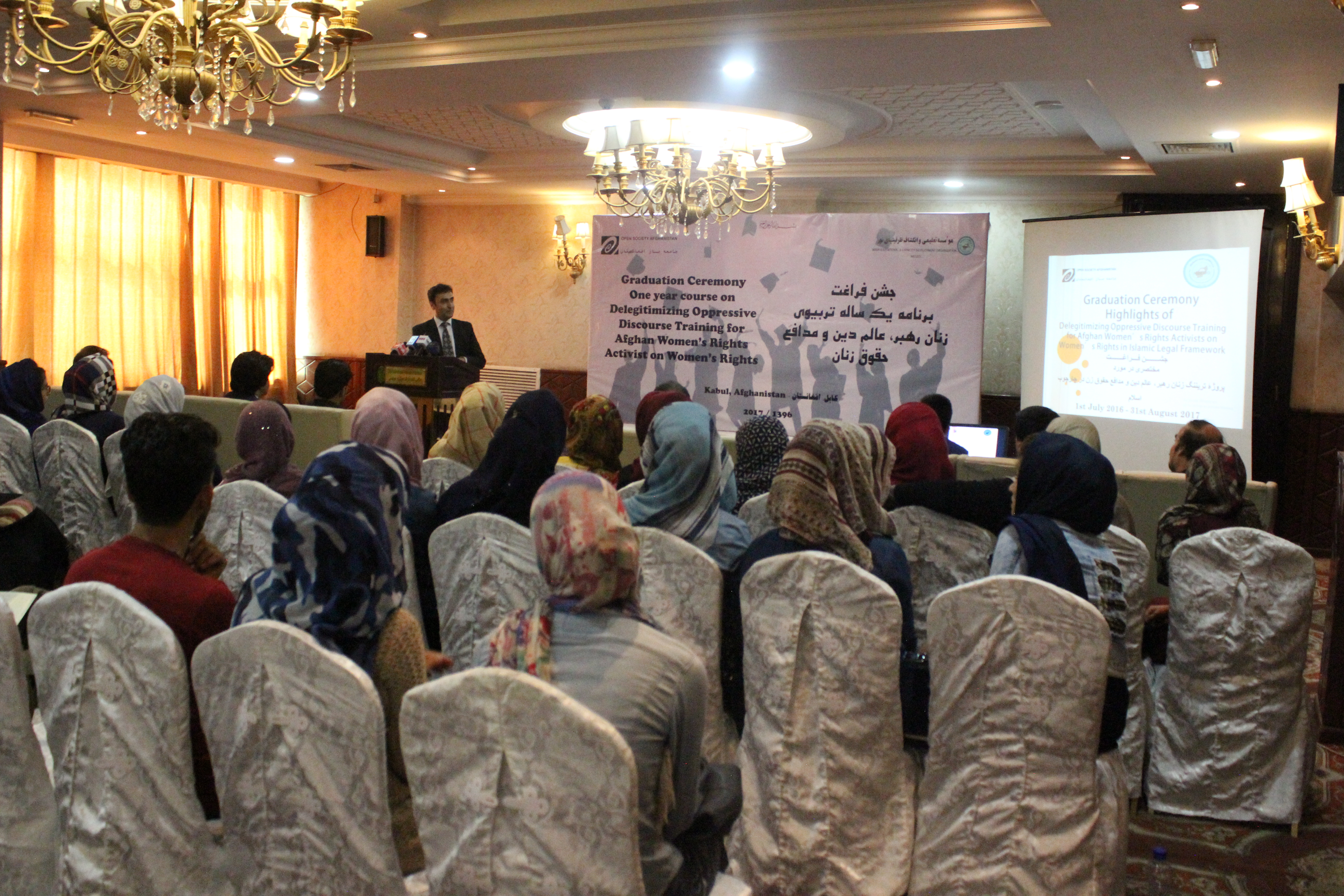 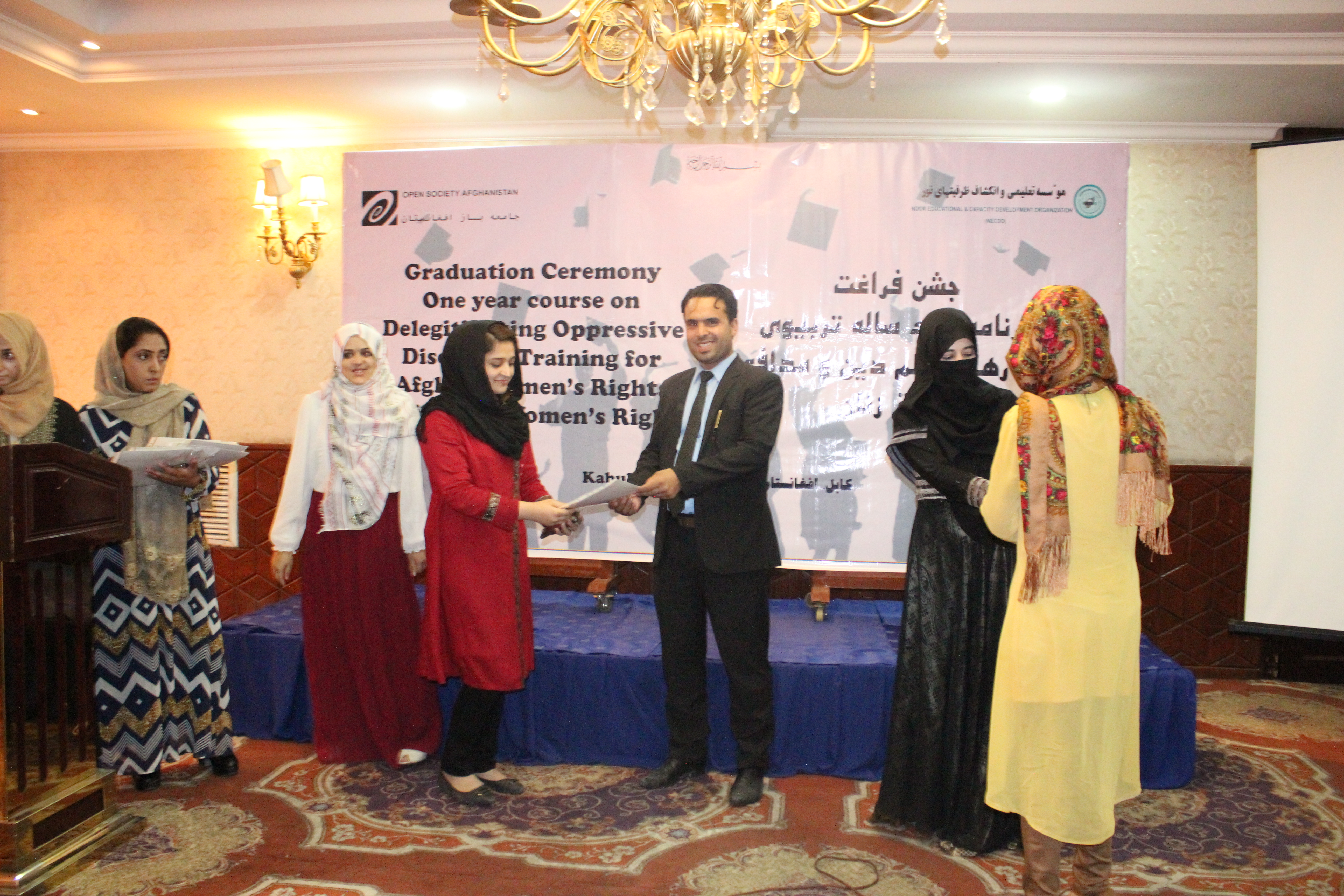 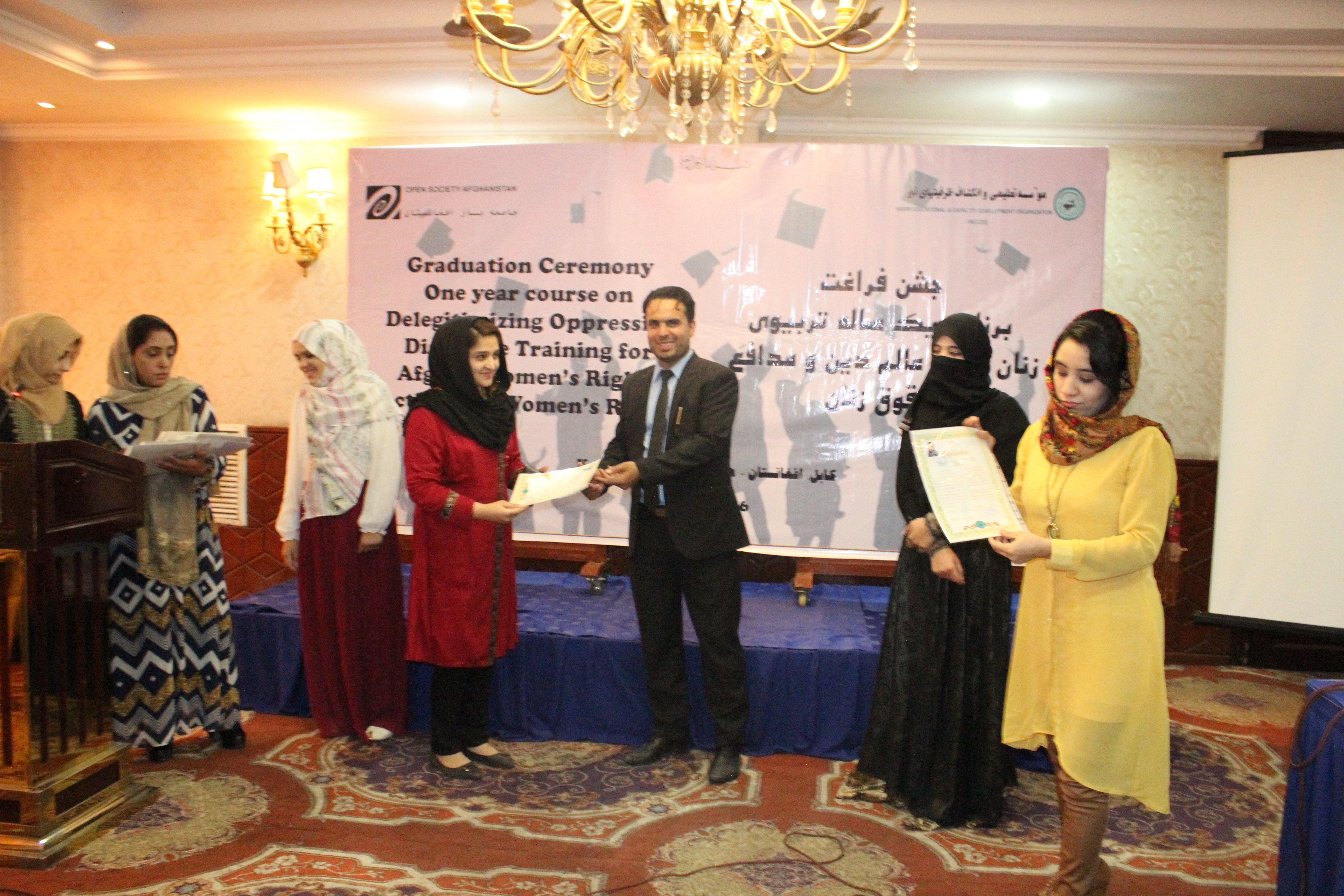 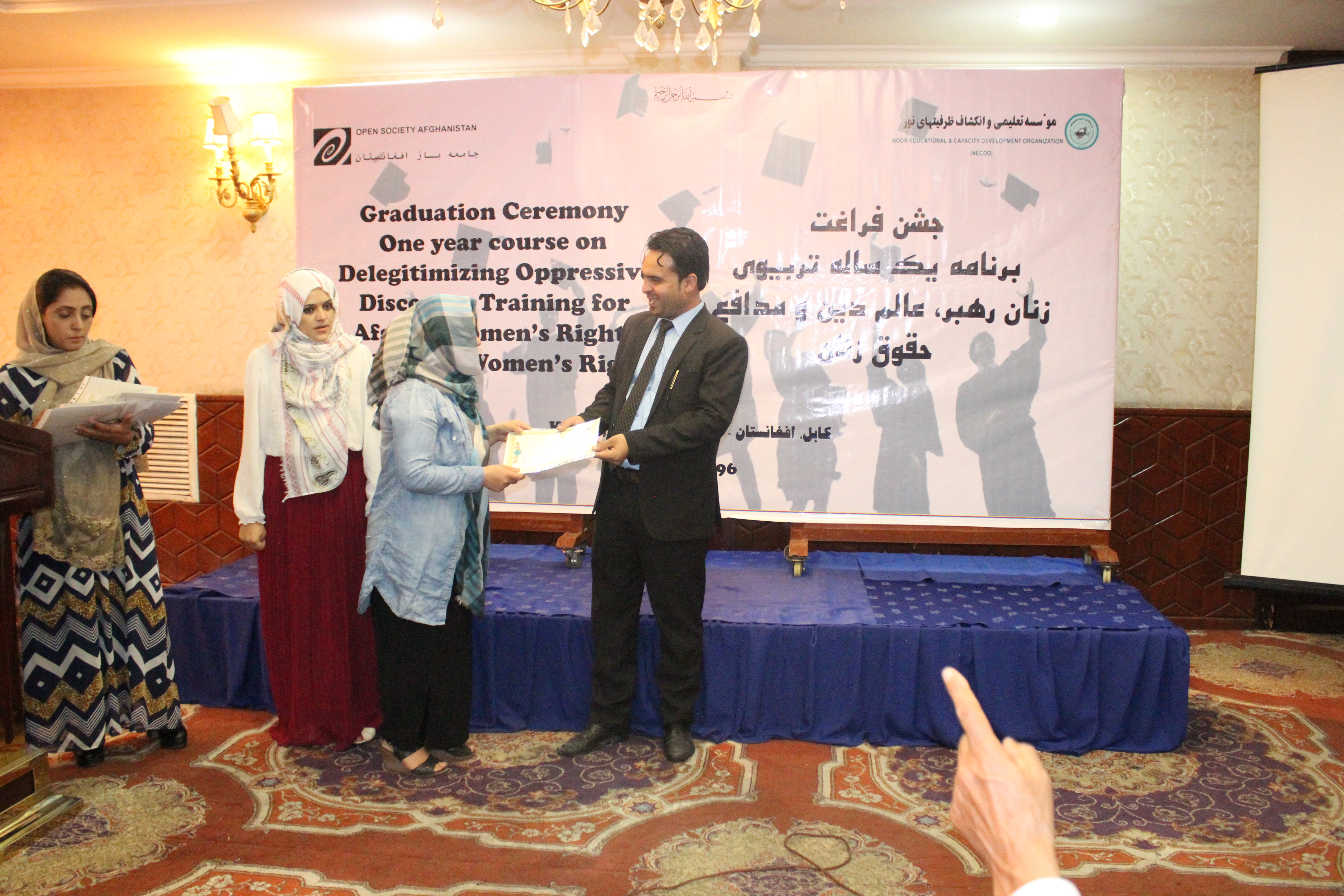 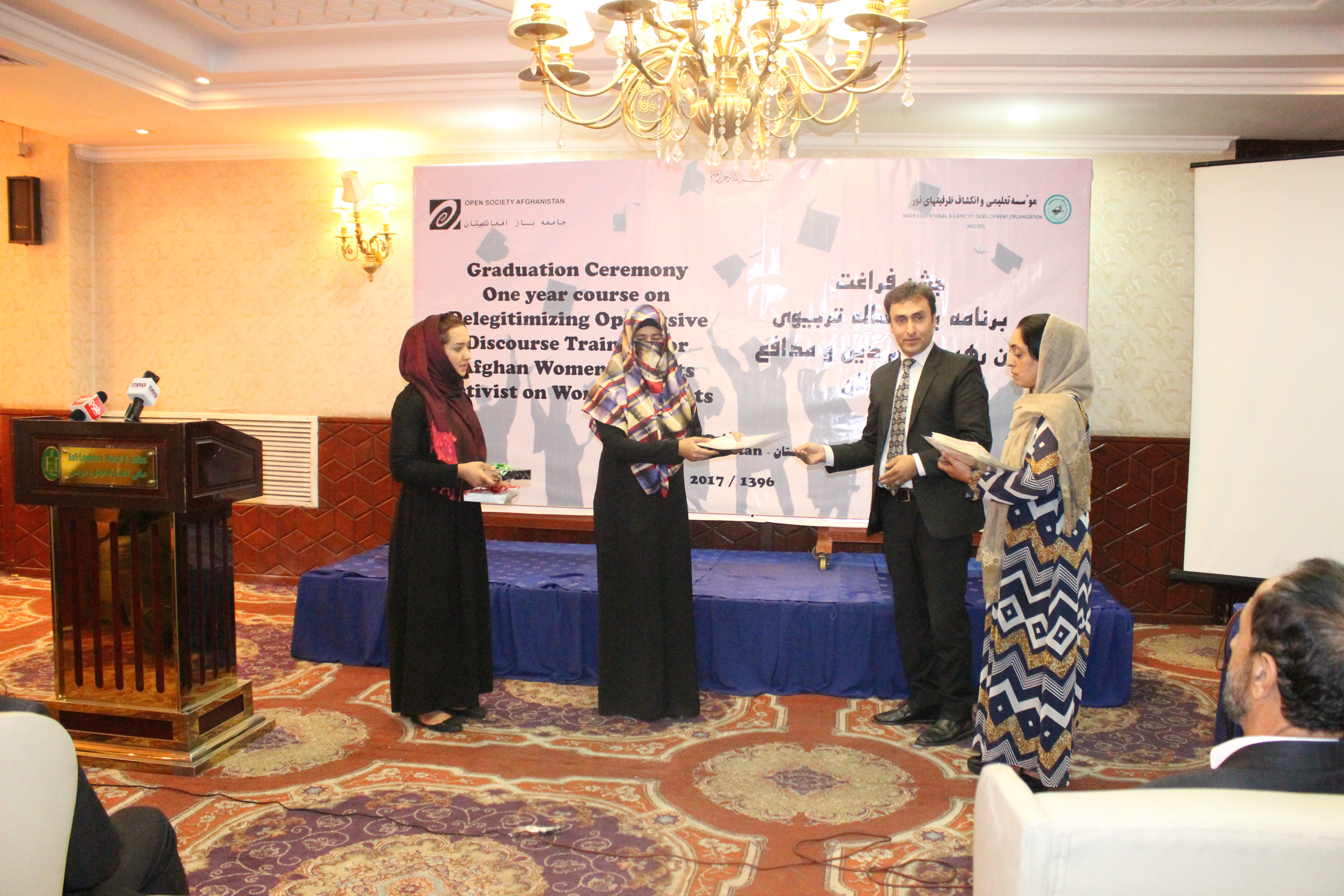 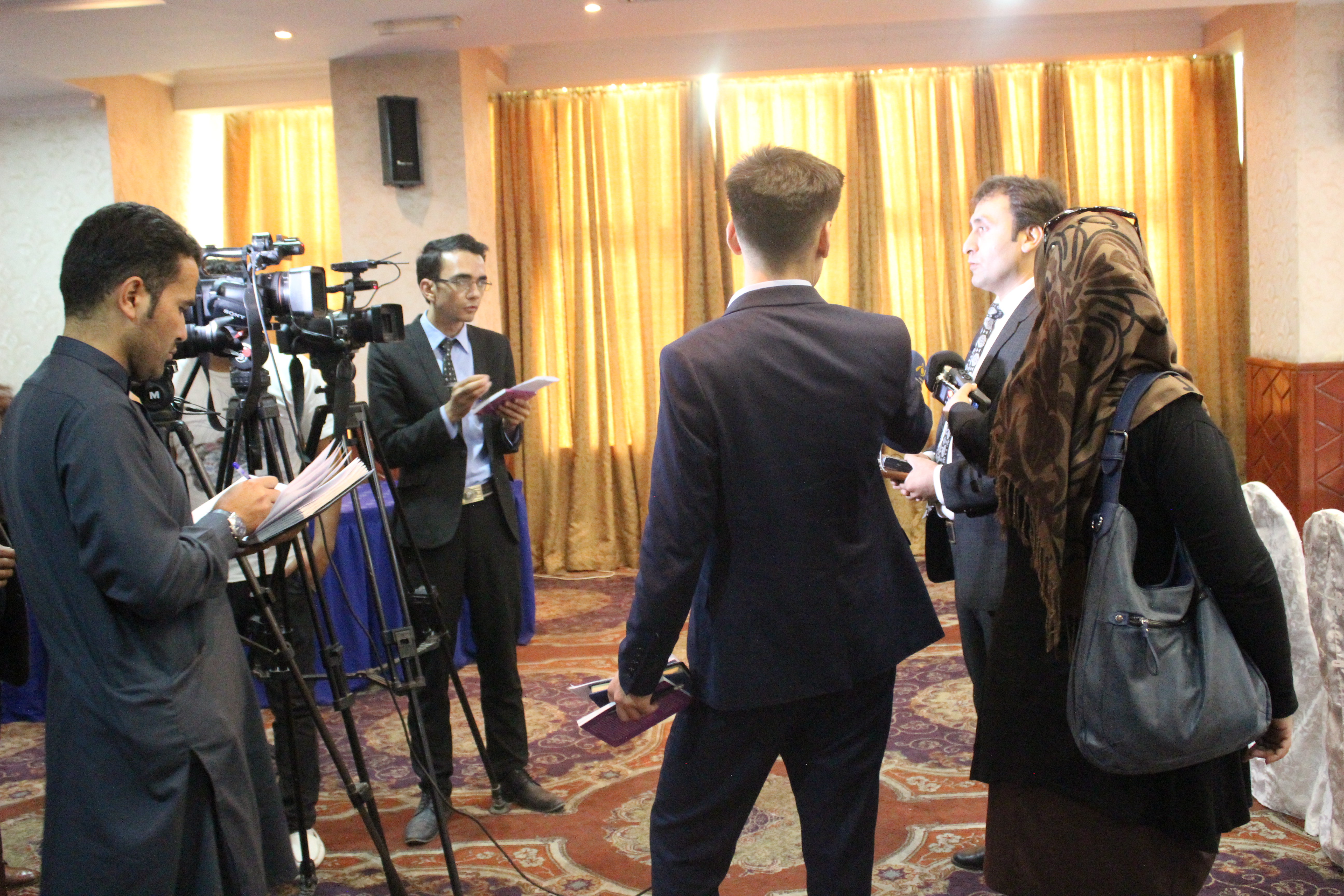