Role of Ulama in Durable Peace, Development and Economy 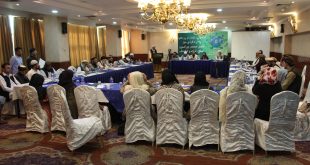 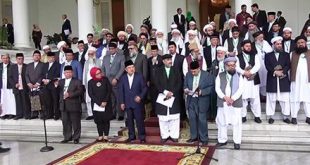 Nahdhat-Ulama Afghanistan has successfully conducted the annual conference 2018 for 100 Ulama and Women (members of NUA individuals and organization such as NECDO, WILPF, KNAHR, Imam Bokhari Madrasa, Hafsa Madrasa, ShamsulQuran Madrasa, Muddassir Madrasa) from almost all provinces of the country, with the technical and moral support of Indonesian Embassy in Kabul.

NUA Shura members from Kabul, Representative from Indonesian Embassy, Ulama from Indonesia,  Media groups, government bodies and security departments both male and female participated in the two day conference on the 11th and 12th of August 2018 under the theme (Role of Ulama in Durable Peace, Development and Economy).

NUA shura appointed a committee in advance to organize the event for the date (11th and 12th August 2018), the committee had done its job well and did all the arrangements. The issue was put forth through a former letter from NUA to the ministry of Haj (MoRA) and requested for support of the program at the same time MoFA and MoJ were informed by a formal letter from NUA to inform their concerned departments, and notify them.

NUA is thankful to its respectable committee for the very good arrangement and communication they did for the conference.

NUA also highly appreciate Indonesian Embassy in particular His Excellency Mr. Arief Rachman the Ambassador of the Republic of Indonesia, the people, the government and the embassy of Indonesia for the technical and financial support which made this program possible to be conducted.

The two day NUA Annual conference begin on Saturday 11th of August, 2018 under the title (Role of Ulama in Durable Peace, Development and Economy) was held in ASSA Hotel in Kabul City. The conference was attended by 100 Ulama (70 male and 30 women), members of NUA Shura (BD) from Kabul, other provinces, representative from Indonesian Embassy, media groups, Government authorities and member of the security department. The conference was successfully completed in the evening on the 12th of August; the Ulama showed their full support to the initiative and declared their readiness to work together with Afghanistan Government and likeminded organizations for Peace, reconciliation and development. The conference was concluded by a press release which emphasized on the role of NUA and Ulama in the peace process upholding the role of Indonesia in this process.

Based on the agreement with the respected embassy of Indonesia to conduct the 2 day annual conference under the theme “Role of Ulama in Durable Peace, Development and Economy” in Kabul Afghanistan to ensure the role of NUA-Ulama in peace and reconciliation, NUA begin its preparation and contacted NUA committees throughout the country to do arrangement for such an event to be conducted in August of 2018, the activities were accomplished chronologically as below:

After that Mr. Sayed Salahuddin Hashami elected Head of NUA presented the annual activity report of NUA through a video. During his presentation he emphasized on participation of women is important in such conferences because women are the ones who are mostly effected in war so they should have a significant role in peace process The program went in accordance to the plan and the agenda the speeches of the delegates from Province were welcomed by the participants and in particular the dynamic speech of his Excellency Mr. Arief Rachman the ambassador of the republic of Indonesia. He Said,

Let us pray to our Almighty God, Allah SWT, for His wisdoms and blessings to make us possible to gather here today to hold a Nahdatul Ulama Afghanistan (NUA) Annual Conference 2018 attended by prominent ulamas across Afghanistan.

I would like to extend my sincere appreciation to Honourable Maulana Sayed Slahuddin Hashemi for his leadership and stewardship of Nahdatul Ulama Afghanistan along the year 2017-2018 that brings Nahdatul Ulama Afghanistan (NUA) to focus on spreading Islam as rahmatan lillalimin which are tolerance, moderate, participant, balance, and justice. Of course, I would also like to welcome our guests, my brothers and sisters, ulamas from various provinces in Afghanistan. Your presence here shows a very strong commitment to promote peace as well as strengthen the relations between the ulamas across Afghanistan.

Last but not least, I would also like to take this opportunity to express my utmost gratitude to Dr. Fazal Ghani Kakar and his team from NECDO who have contributed so much in preparing and organizing this important conference.

Last year, Nahdhatul Ulama Afghanistan had successfully conducted the annual conference 2017 for 165 Ulama From almost all provinces of Afghanistan. Media groups, government bodies and security departments male and female participated in the two day conference on the 15th and 16th of May 2017 in Safi Landmark Hotel, under the theme (Role of ULAMA –NUA- in Peace, Development, respect to human rights and love with humanity). The committee had done its job well and did all the arrangements. For this, I thank you again.

Ulamas hold a very important role in the society. Ulamas are considered as leaders of the society in which the people of Afghanistan look up to. Ulamas have the capacity to mobilize grass root societies, and help them shape a mindset that will determine who they will become, and how they will act in the future.

Let us follow the footsteps of our Prophet Muhammad SAW, who always upholds and practices peaceful values in His precious and valuable daily life. Our Prophet Muhammad SAW always taught us that Muslims are brothers, not enemies who tend to hurt, or even take each other’s lives. Rasulullah (Peace be Upon Him) said “The parable of the believers in their affection, mercy, and compassion for each other is that of a body. When any limb aches, the whole body reacts with sleeplessness and fever.”

Indonesia, as the biggest Muslim majority country in the world, would not remain silent and idle. We have commitment to help our brothers and sisters in Afghanistan by many possible ways. In the issue of peace and reconciliation, we have been promoting the role of Ulamas in Afghanistan since years ago. Indonesia hosted the Indonesian and Afghanistan Ulema Conference in Jakarta, 20 – 24 November 2017 and Trilateral Ulama Conference (Afghanistan, Indonesia and Pakistan) in Bogor on 5 May 2018. Indonesia, as a Non-Permanent Member of the United Nations Security Council (UNSC) for period of 2019-2020, will make Afghanistan as a focus of attention to achieve peace in the future based on Afghan led process/Afghan owned process. Indonesia and Afghanistan all together, spread the slogan: “damai itu indah, peace is beautiful for all”.

If you allow me to share my thought what Ulema can do in the future, among others, are:

Upon completion of this conference, I hope our fellow Afghan Ulamas could continue to convey positive messages to their respective societies, to lead them, and guide them in the right direction, a path that is painted by only one single color, the color of peace. Insya Allah, Allah SWT will give His blessings for those of us who contribute to establish a virtuous society. (Amin)

I wish you all a fruitful conference.

NUA also awarded the following members for the best performance:

The following dignitaries were given the honorary membership of NUA: 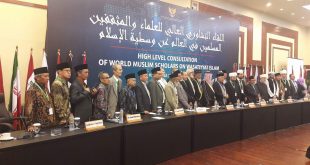 Based on the Invitation form H.E President of the Republic of Indonesia, two NUA Members … 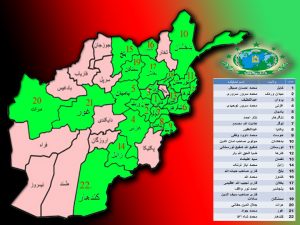